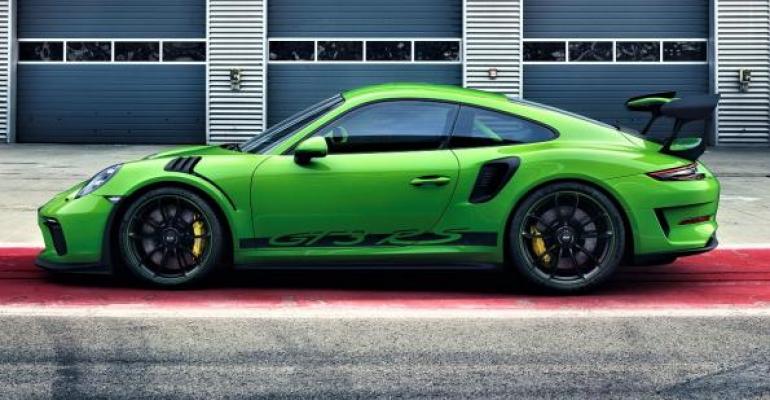 <p><strong>Available to order now prior to a public debut at next month&rsquo;s Geneva motor show, the &rsquo;18 model receives an added 20 hp from a lightly modified version of Porsche Motorsport&rsquo;s race-bred 4.0L 6-cyl. engine, increasing its reserves to 513 hp at 8,250 rpm.</strong></p>

Available to order now prior to a public debut at next month’s Geneva motor show, the ’18 model receives an added 20 hp from a lightly modified version of Porsche Motorsport’s race-bred 4.0L 6-cyl. engine, increasing its reserves to 513 hp at 8,250 rpm.

This is the highest power figure yet for a naturally aspirated road-going Porsche model and serves to distance the new 911 GT3 RS from the standard 911 GT3, which adopted the same 493 hp evolution of the horizontally opposed engine as the previous 911 GT3 RS when it was updated last year.

Porsche Motorsport isn’t revealing the engineering changes made to the 911 GT3 RS’s engine but confirms the rear-mounted unit continues to rev to a maximum 9,000 rpm and comes mated to a standard 7-speed dual-clutch gearbox.

Among the chassis changes Porsche Motorsport has announced for the 911 GT3 RS ahead of U.S. deliveries later this year is a recalibrated rear-wheel steering system. As with the old model launched in 2015, the suspension of the new model uses solid ball joints on each arm for added steering precision. Wheels and tires measure 20 ins. and 265/35 in profile up front and 21 ins. with 325/30 profile at the rear.

Visually, the new Porsche road racer is differentiated from its predecessor by a series of subtle aerodynamic and styling upgrades. They include new LED indicator lamps set within a re-profiled front bumper featuring new vertical air flow guides within the outer air ducts to more efficiently channel air to the front-mounted radiators and brakes.

Further back, the new 911 GT3 RS receives two new NACA style ducts within the hood and additional air flow guides for the ducts within the rear fenders. At the rear, there are more heavily structured taillamps, a new bumper with larger air extraction ducts and modified supports for the rear wing, which feature newly shaped end plates.

Inside, there are carbon-backed racing seats, lightweight door panels with storage nets and nylon opening loops. Weight optimization measures include a reduction in sound absorption material and a new lightweight engine lid.

As with all of Porsche’s existing GT models, the 911 GT3 RS is sold with an optional Clubsport package. It consists of an aluminum roll cage, fire extinguishers and 6-point seat belts.