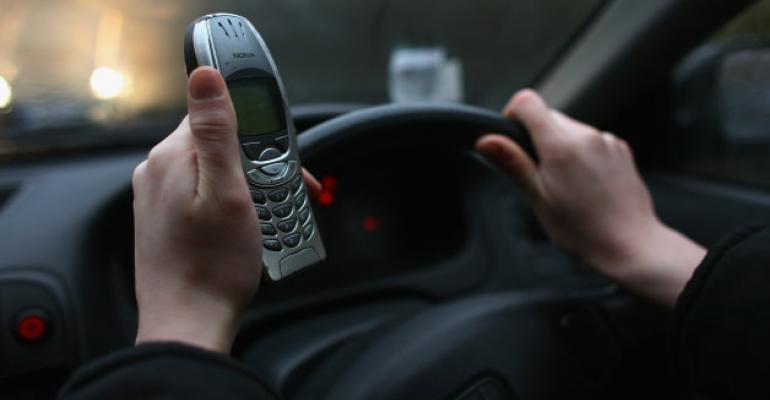 <p><strong>Lobby calls for mix of incentives, penalties to get drivers to hang up. </strong></p>
Vehicles

IAM RoadSmart&rsquo;s call for a crackdown on smartphone use while driving comes as U.K. Department of Transport ministers plan to meet with manufacturers to devise proposals to tackle the issue.

LONDON – A U.K. road-safety advocacy group is calling for car and smartphone makers to come up with technological solutions to prevent motorists from using mobile devices while driving.

The IAM RoadSmart charity says simply hoping drivers will do the right thing is not good enough.

The move comes as U.K. Department of Transport ministers plan to meet with smartphone manufacturers this month to devise proposals to tackle the growing issue of motorists interacting with their mobile devices.

IAM RoadSmart welcomes the recent toughening of penalties for those caught using their smartphone while driving – now £200 ($245) plus six points against the 10 points that ban driving – but the charity wants a more proactive approach.

“It isn’t enough for the providers of this technology to simply say ‘It is up to the individual,’” Greig says. “Every phone in use today already comes with a driving mode that can cut out calls, but they are very rarely used. This would suggest that carrots or sticks may be needed to actually get people to use any new approach.

“Carrots could come in the form of incentives for companies to fit new apps or to ensure their employees switch off on the go. For example, no government contracts unless (a business has) a ‘no mobile-phone use’ policy in place.

“Sticks could come in the form of new penalties but also links to insurance so your level of cover is reduced if you don’t have the new app switched on when you have a crash.”

Greig notes details of the new technology still must be worked out. “But with accurate GPS and more sensitive movement sensors in most phones, it should be possible to target the driver’s phone while still allowing the ever-growing range of connected-car services such as (satellite navigation) and traffic/tourist information. Passengers should still have the ability to use phones as well.”