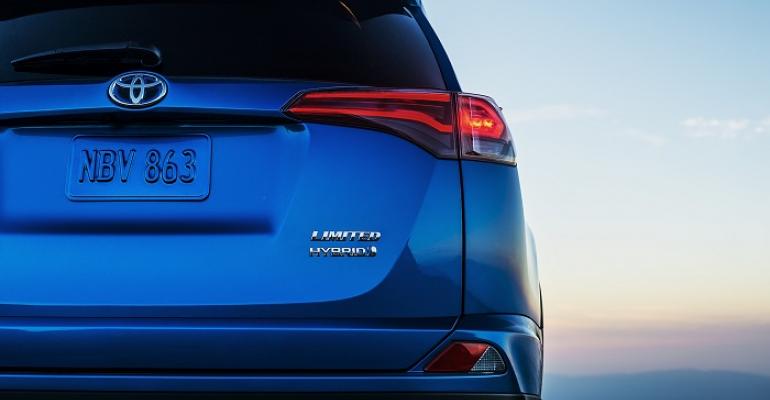 The RAV4 becomes the Toyota brand&rsquo;s fourth hybrid version of a standard model in the U.S., joining the Camry, Highlander and Avalon hybrids.

Toyota divulges no details, but releases a teaser image of the rear of the RAV4 with hybrid badging. The vehicle also has “Limited” badging, indicating the RAV4 will maintain Toyota’s current scheme of offering its hybrids in a range of trim levels.

Toyota has a long-standing directive to offer hybrid versions of all its models in the U.S. sometime in the 2020s.

The RAV4 is the Toyota brand’s fourth hybrid version of a standard model in the U.S., joining the Camry and Avalon hybrid cars and the Highlander Hybrid CUV.

Toyota also retails a lineup of dedicated hybrids under the Prius nameplate.

The Japanese automaker previously offered an electric version of the RAV4, the RAV4 EV, co-developed and produced with Tesla. The vehicle went on sale in 2012 in California and was discontinued last year when a battery-supply deal with Tesla ended.

Tesla to Stop Supplying Batteries for Toyota EV
May 13, 2014