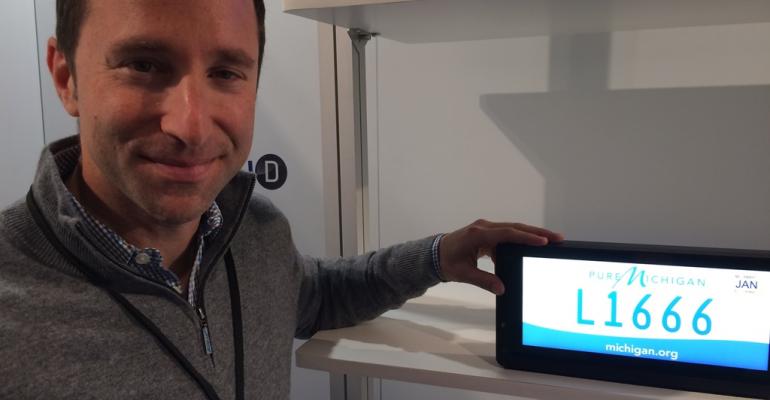 The high-tech product aims to eliminate legacy hardware that has adorned vehicles for 125 years.&nbsp;

DETROIT – In what could be a blow to a longtime prison industry, a startup company is touting its new product: the first-ever digital license plate.

At the auto show, WardsAuto speaks with Reviver President Scot Gensler about the high-tech device, its multi-functionality and its business prospects. Here’s an edited version of the Q&A.

WardsAuto: What’s the idea behind it?

Gensler: When we think about the automobile, the only thing that has never been reinvented is the license plate. We’re taking the traditional metal plate and turning it into an Internet-of-things digital display.

It has a bunch of functionality baked into it that forms the heart of a connected-car platform. The first applications we’re launching are automated connections to state DMVs. That includes over-the-air updating, titles, tags and registration. There’s also the ability for messaging, telematics and vehicle tracking. The platform itself can power thousands of applications, leveraging the functionality on the plate. There are a lot of things the screen unlocks.

WardsAuto: Some of what you mentioned seem unrelated to the purpose of a license plate.

Gensler: Advertising messages and personal expressions. You might show something related to a sports team or a cause you care about. We also have public service announcements; things like Amber alerts and weather warnings.

WardsAuto: If it doesn’t always display a license plate, wouldn’t that be nice for someone like a bank robber in a getaway car?

Gensler: A number of people have asked that. We call it “the James Bond effect.” We are working with state departments of transportation and DMVs to put things in place that don’t allow criminal behavior.

Each plate is tied to the vehicle’s VIN. If somebody takes it off, it will be completely useless. The backend system is secure, so people can’t do things like you’re suggesting.

WardsAuto: In issuing a plate, the DMVs could just digitally send it to a car owner?

Gensler: Exactly. It can automate payments and renewal sticker issuances.

WardsAuto: How does it do that exactly?

Gensler: The device has mobile LTE connectivity, and then there’s accessibility on PC tablets and mobile devices that allows you to manage the plate itself.

WardsAuto: What about dealing with legislative issues. Have you encountered any resistance there?

Gensler: This is the only startup I’ve been involved in that has a core competency in legislative operations. We spent three-and-a-half years with the State of California to get legislation passed to allow these things to be on the road. We’ve built features in partnership with state DMV offices.

We’re launching this year in California, Florida, Arizona and Texas. Those states represent one in four cars in the country.

WardsAuto: So the DMVs don’t see any scenarios where there’s going to be a problem?

Gensler: Because there’s never been a digital license plate, they don’t have laws and regulations for it. We’re acting in a spirit of partnership with them to work out what is in everybody’s best interest.

WardsAuto: With any true innovation, there are always going to be people who go down the list of what can go wrong. That’s just human nature.

WardsAuto: Have you faced that?

Gensler: We hired a vice president of software engineering who comes from the security industry. That was one of our biggest concerns: how to prevent this thing from getting hacked, not to mention theft. Also, how do we deal with profanity and inappropriateness so those never make their way onto the plate.

WardsAuto: How do you prevent that?

Gensler: Encryption, for example. My VP of engineering could give you a more technical answer, but we’ve taken a lot of steps to prevent or make it incredibly difficult to get in there.

WardsAuto: But what about vehicle owners who can get in there and decide they want to display a raunchy message?

Gensler: Right now, we are approving every image before it goes live. In the future, we’ll have automated filters that pick up on profane words, nudity and copyright violations.

Gensler: My estimate is a couple of years, but we have certain prerequisites to complete before releasing to the consumer world. A few dozen prototypes are on the road now in California. The final product will be skinnier and lighter.

We hope this ultimately is on the front and back of every vehicle OEMs manufacture.

WardsAuto: If you are on the ground floor of a product automakers are slapping on vehicles coming down an assembly line, you’d be looking good.

Gensler: We’d be looking fantastic. That’s absolutely where we want to be.