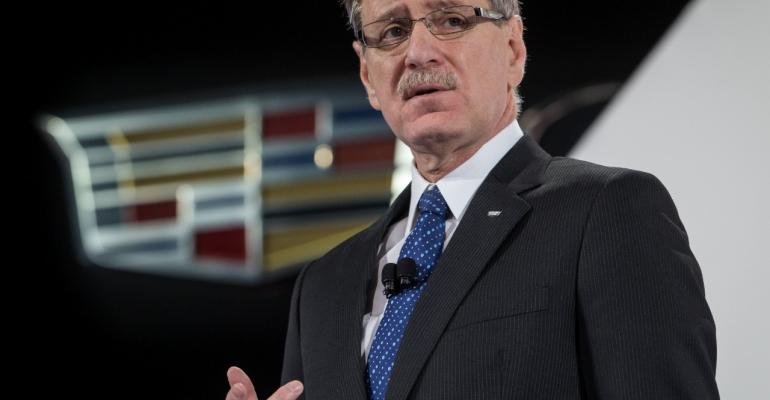 He describes as a “nightmare” the idea of “taking the fun out of driving by letting a robot transport us.”

He notes Silicon Valley technology companies such as Google and Apple are pursuing automotive connectivity and autonomous-car projects on their own.

But he questions whether they can develop vehicles that match or even come close to what the auto industry can offer consumers.

“Many autonomous car (prototypes) emphasize sheer functionality,” he says as a photo of a bubble-shaped Google experimental car appears on big video screens flanking the stage. “It would be a mind-numbing experience going from point A to B. My goodness, you might as well take the bus.”

A goal of Cadillac in particular and GM in general is to develop autonomous cars that “enhance the joy of driving, but eliminate the tedious parts," such as the hassle of stop-and-go rush hour , de Nysschen says, noting the benefits of a car taking over driving duties in such mundane traffic situations.

On the other hand, he floridly describes the joy of driving a vehicle such as the high-performance ’16 Cadillac CTS-V. “You can feel the road surface through the seat and hear the symphony of a perfectly tuned engine. It gives you goose bumps. A fine automobile is one of life’s great joys.”

He touts GM’s ambitious semi-autonomous Super Cruise system that features a network of sensors. “The difference between Super Cruise and fully autonomous lies more in the legal than the technical arena.  I’ll leave it at that.”

Once No.1 of luxury brands in the U.S, Cadillac ranked No.5 in sales last year, trailing behind Mercedes-Benz, BMW, Lexus and Audi, in that order.

GM hired de Nysschen last year to revitalize the 130-year-old brand. He is a premium-brand veteran, having worked for Audi and Infiniti before joining GM.

He says Cadillac’s cache is such that the name still is used as an adjective to describe excellence. “My favorite was a review in which someone said ‘This is the Cadillac of Mercedes-Benz.’”

Worldwide, the brand is mining for Millennials, especially in China and the U.S., as they get older and more affluent.

“Because they are entering the market later, they have more money to buy a car,” he says of many Millennials, referring to the phenomenon of their delayed car purchases, something that had initially spooked the auto industry.

“They are giving up entry-level offerings in order to make an automobile their first luxury purchase.”

Cadillac plans to appeal to Millennials by meeting their mobile connectivity needs. “It’s a misperception to think Millennials are tech-savvy, de Nysschen says. “What they are is tech-dependent. They have lived with technology all their lives, and now they can’t live without it.”