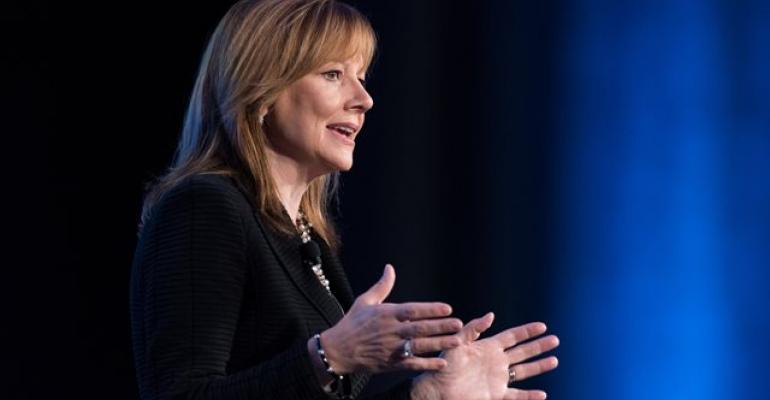 GM expects the technology&rsquo;s rollout to occur in a controlled environment such as ride-sharing before it is put into mass production.

General Motors Chairman and CEO Mary Barra says the automaker is making progress on the development of autonomous-driving technologies, but more work lies ahead on the safety front before it can be installed on everyday cars and trucks.

GM has 30 autonomous vehicles on U.S. roadways between testing exercises in San Francisco and Scottsdale, AZ, where the automaker has been piling on R&D miles and learning by performing different scenarios.

“We are very pleased with the team’s performance,” Barra says.

But, she adds, GM expects the technology’s rollout to occur in a controlled environment such as ride-sharing before it is put into mass production. GM recently made two moves on that front to support its autonomous efforts through an equity stake in Lyft, the No.2 ride-hailing service in the U.S. behind Uber. The automaker also launched its on-demand mobility service Maven, which operates in five metropolitan areas.

“As we look at launching autonomous (cars) into the marketplace, we believe it will first happen in a controlled environment, a ride-sharing environment,” says Barra, who predicts GM will lead the market on the technology in the future. “That’s because it will be geo-fenced. You are going to have limitations with speed and other limitations. That’s why the ownership will stay with the company in these first models as we continue to learn. That path is very much on track.”

GM will make autonomous technology available to all consumers only after it is completely safe, Barra says. The automaker already delayed the rollout of its Super Cruise semi-autonomous technology on the Cadillac CT6 large sedan from this year to next year because it was not ready and then spent $1 billion to acquire Cruise Automation, a San Francisco-based specialist in autonomous-driving technology, to double down on development work.

“We are working very hard to (launch autonomy) in the safest manner possible,” she says, citing hopes an industry rollout of it will prevent 90% of the crashes on U.S. roadways attributable to human error. “We think we can make a big dent on that (but) it will be gated by safety. Once we’ve got the right system (and) working with regulators we have the scale to put those vehicles into production very quickly.”

Rulemakers are expected to play a major role in the rollout of highly automated vehicles, which can take control from the driver in certain circumstance. The U.S. Dept. of Transportation last month released an automated-vehicles policy for automakers to use as guidance for bringing it to market as quickly as possible.

However, Barra stops short of predicting a leading region for the rollout, because regulatory frameworks differ from country to country.

“There is a lot to play out before calling who is going to lead,” she says.

On the topic of electrification, Barra says more work lies ahead in bringing down the cost of the technology, but now that Europe appears to be sharing the enthusiasm of China and the U.S. more hybrid- and battery-electric models soon could be coming to the market in greater numbers.

“It’s too soon to call exactly how significant the penetration, but probably more than we thought maybe a year or two ago,” she says.

GM’s record third-quarter earnings come off best-ever sales in the period of $42.8 billion, driven by a strong performance in North America. The automaker sold 2.4 million vehicles globally between July and September, up 3.8% compared with year-ago.

GM remains bullish on its financial outlook for the year, although Chief Financial Officer Chuck Stevens warns of growing uncertainty in Europe following the U.K.’s vote to leave the European Union and the possibility sales in China could deflate if the government there discontinues new-car purchase incentives next year.