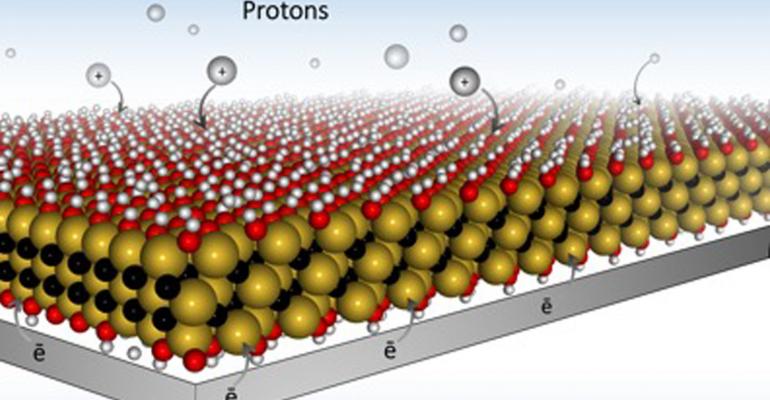 Engineering researchers at Drexel University, working with colleagues in France and Israel, say finding time to stop, plug in and recharge could become history as their new electrode design could charge EV batteries in seconds instead of hours.

Engineering researchers at Drexel University in Philadelphia, working with colleagues in France and Israel, say finding time to stop, plug in and recharge could become history as their new electrode design could charge batteries in seconds instead of hours.

They say it could solve one of the primary issues holding back the electric-vehicle market.

Previous research has looked at the use of supercapacitors as an energy-storage device for portable electronics. Supercapacitors release energy in large bursts, but they can be used only for rapid charge/discharge cycles rather than long-term energy storage.

Now, researchers from Drexel’s College of Engineering have combined the properties of a supercapacitor with those of traditional batteries with large storage capacities by using MXene.

“We demonstrate charging of thin MXene electrodes in tens of milliseconds,” Gogotsi says in a statement.

“This is enabled by very high electronic conductivity of MXene. This paves the way to development of ultrafast energy-storage devices than can be charged and discharged within seconds, but store much more energy than conventional supercapacitors.”

MXene is a flat nanomaterial that looks like a sandwich: consisting of oxide “bread” with a conductive carbon and metal filling. When they are made, Gogotsi says the MXene layers stack on top of each other like Pringles potato chips.

While MXene has excellent conductivity, the Pringle structure creates a barrier that makes it tricky for ions, the chemical carriers of charge, to diffuse through the battery.

For a battery to store charge, ions are held in ports called redox active sites. The more ports there are, the more energy the battery can hold and, importantly, the battery also has to allow the ions to move freely; otherwise they can’t reach the ports.

To allow the free movement of ions in MXene, something had to be done about the structure.

The Drexel scientists changed the structure of the MXene by combining it with a hydrogel, turning the Pringle stack into a structure more like Swiss cheese allowing the ions to flow freely.

“In traditional batteries and supercapacitors, ions have a tortuous path toward charge storage ports, which not only slows down everything, but it also creates a situation where very few ions actually reach their destination at fast-charging rates,” team member Maria Lukatskaya says.

“The ideal electrode architecture would be something like ions moving to the ports via multi-lane, high-speed highways instead of taking single-lane roads,” she says. “Our macroporous electrode design achieves this goal, which allows for rapid charging – on the order of a few seconds or less.”

MXene was discovered by researchers in Drexel’s Department of Materials Science and Engineering in 2011.

The university says its development for use in batteries is significant, largely because it addresses one of the primary problems hindering expansion of the EV market.

“If we start using low-dimensional and electronically conducting materials as battery electrodes, we can make batteries work much, much faster than today,” Gogotsi says. “Eventually, appreciation of this fact will lead us to car, laptop and cellphone batteries capable of charging at much higher rates – seconds or minutes rather than hours.”

Gogotsi says the overarching benefit of using MXene as the material for the electrode design is its conductivity. Materials that allow for rapid flow of an electrical current, such as aluminum and copper, often are used in electric cables.

MXene is conductive, like metals, so ions not only have a wide-open path to a number of storage ports, but also can move very quickly to meet electrons there.

The team concedes that while the work looks promising, it’s unclear exactly how the battery would be upscaled for use in a vehicle. But they say that should this research end up in cars – and phones – it will completely change the way batteries are used.