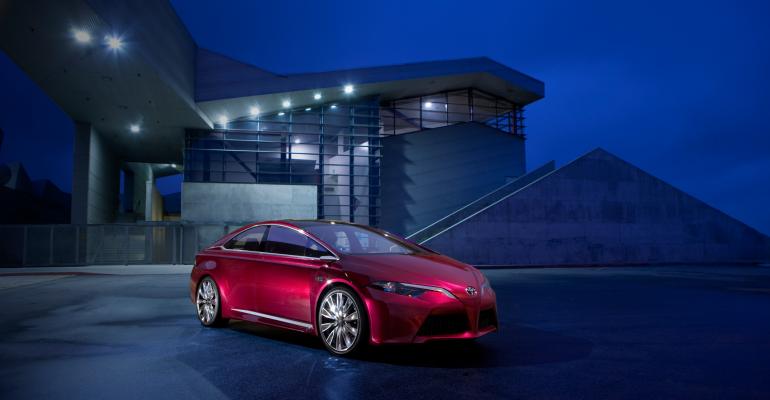 Toyota is broadening its hybrid stable with a plug-in Prius and Prius C city car due on the market this year. The NS4 provides a glimpse of what&rsquo;s to come mid-decade

The NS4 is billed as Toyota’s vision for the year 2015 and features a drive system that “will have evolved significantly,” says Toyota Motor Sales U.S.A. President and Chief Operating Officer Jim Lentz.

Lentz declines to reveal the cost-reduction target or other details of the advanced plug-in system. But he says it will be “smaller, lighter and have a longer range, better acceleration and shorter recharge times” than the auto maker’s current plug-in technology bowing this year on the Prius.

“By the middle of this decade, plug-ins will be mainstream technology,” he adds.

The concept is fueled with lithium-ion batteries, but Lentz hints Toyota may be looking even beyond that technology.

“If this is a plug-in, it will not be nickel-metal hydride, because the plug-ins need the more density of batteries,” he says. “(But) Li-ions are not going to be the mainstay battery source forever.

“The question is, by 2015, is there something beyond lithium that’s even lighter and less expensive. I just can’t tell you right now, because we don’t know for sure.”

In addition to its under-cover powertrain, the NS4 features a number of other advanced technologies.

Large solar panels in the roof provide electric power and four new glass technologies are employed throughout the car that variously eliminate fogging, stop most of the ultraviolet light from entering the cabin and prevent raindrops from obscuring vision.

A new-generation pre-collision system that Lentz says is “right around the corner” incorporates lane-departure prevention and rear-end and pedestrian-collision avoidance technologies that use millimeter-wave radar and cameras for operation. Near-infrared technology allows the system to function fully at night.

The concept is joined here by the Prius C, making its U.S. debut and hitting the market this year.

The car is expected to appeal to urbanites and draw younger buyers who can’t afford a standard Prius.

“The only way you’re going to get a Prius at that price point is a used car, because a Prius is transacting at somewhere around $25,000,” he says. “We view this as a gateway vehicle to Prius and will add incremental sales. We think it’s going to be a huge hit.”

Lentz targets sales of 15,000 units a year and predicts the plug-in will bring early adopters that purchased the first Priuses back to Toyota showrooms.

Toyota says sluggish sales of hybrids at times last year had more to do with supply constraints due to the tsunami in Japan than market disinterest.

“We still think (the market) is very good,” Lentz says. “This year will be very interesting, because prognosticators say there’s going to be tremendous fluctuation in the price of fuel. I think you’ll see Priuses have a great year this year.”