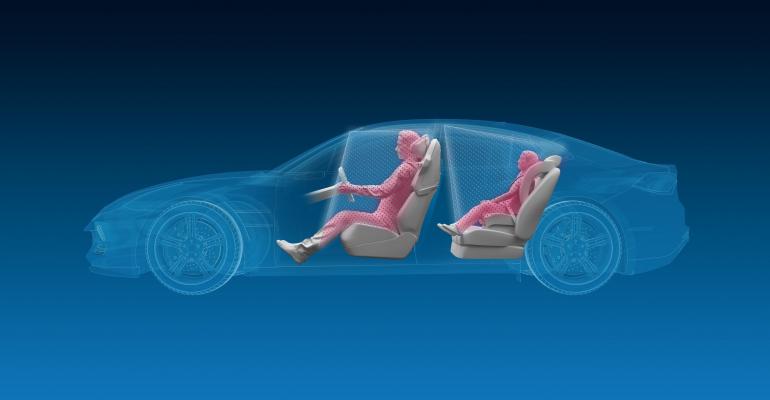 ZF’s interior observation system can determine the occupants’ size, location and position, and whether they are in active control of the vehicle via the steering wheel or monitoring the vehicle’s automated driving systems, the supplier says.

Automotive supplier ZF announces it is developing a 3-dimensional interior observation system (IOS) it says is capable of highly accurate occupant and object detection and classification for front- and rear-seat occupants.

The system can determine the occupants’ size, location and position, and whether they are in active control of the vehicle via the steering wheel or monitoring the vehicle’s automated driving systems, ZF says in a news release.

This data provides real-time inputs for advanced safety and automated driving functions, such as determining if the driver quickly can retake control in an emergency, the release says.

With occupant position sensing, for example, seat-mounted sensors already are used to determine whether airbag and seatbelt pretensioners should be deployed and at what force. A 3D IOS camera can augment this information regarding the occupants’ size and real-time position and posture, including out-of-position detection such as reclined seats.

Knowing if an occupant or other object is present in a seating position can help determine if, and with which, adaptive occupant-safety functions to deploy in that position prior to or in the event of a crash.

The system also can help sense driver distraction to allow the vehicle’s onboard systems to issue alerts, ZF says.

Occupant sensing also can be valuable when small children may be left in the car, leading to emergency situations particularly in extreme temperatures, ZF says.

The IOS system can be calibrated to determine the presence of a child and activate emergency actions such as automatically calling the vehicle owner’s mobile phone, lowering electric windows and opening a moonroof to reduce interior temperatures, activating the horn and emergency flashers so others nearby can assist, or calling OEM emergency-service providers, local police and first responders to assist in rescuing the child.

While ZF is an established producer of forward-facing object-recognition cameras that sense the external vehicle environment, the company also has been involved in the development of interior observation cameras for more than 10 years. The IOS system is expected to be production-ready by late 2021, the company says.

On-Vehicle Cameras Watch Out for Drivers by Watching Them
Mar 27, 2014