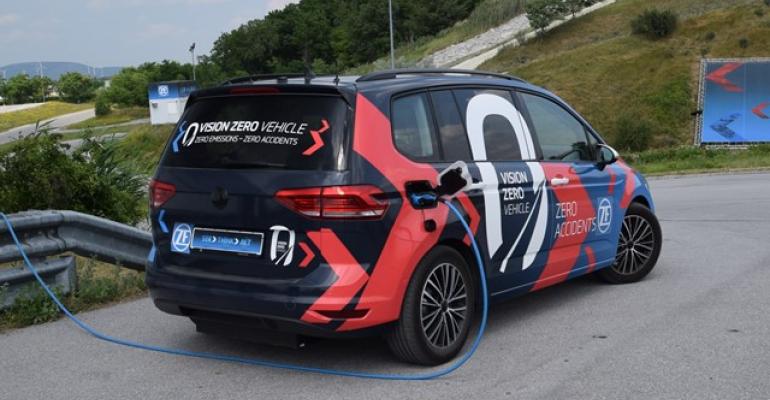 ZF is eager to form partnerships to achieve economies of scale, speed up product development and share competencies. The plug-in Vision Zero concept, to be shown in Frankfurt, incorporates many of ZF&rsquo;s latest technologies.

A number of these collaborations, including the latest one with Hella, involve no exchange of equity. But ZF purchased a 40% share of doubleSlash and 45% of Astyx. Asked if ZF wants to increase its stake in Astyx because of its expertise in radar imaging, ZF CEO Stefan Sommer tells WardsAuto that is an option if the collaboration is successful.

ZF is eager to form partnerships to achieve economies of scale, speed up product development, share competencies, gain a competitive advantage and learn about a particular technology from a company with vast knowledge of it, Sommer says at the company’s global press conference here.

“We do not want to reinvent what other partners have already created successfully in the market,” Sommer tells journalists.

ZF leaped into autonomous-vehicle technology with its 2015 acquisition of TRW, which supplies brakes, steering systems, airbags, seatbelts and adaptive cruise control, so the company already had expertise in long-range radar.

But Hella is strong in short-range 24-GHz radar and vision systems that can see around the entire vehicle and enable technologies such as blind-spot detection and lane-keeping.

“Together we really can offer the automotive world cost-competitive high-tech products,” Hella CEO Rolf Breidenbach says at the press conference. “For us, this is also a very good opportunity to enter the systems market.”

Breidenbach sees joint ventures as binding and agrees that open strategic partnerships like the one with ZF are preferable.

“What we need today are open cooperations, meaning all the partners have to bring in their best products, knowhow and motivation to the table,” he says. “On other hand, they need the possibility to realize economies of scale, to leverage their technologies.”

As part of its long-term planning, ZF made predictions in 2013 about the growth of driver-assist systems (such as lane-keeping) that will be in place by 2025, but Sommer says ZF underestimated the speed at which the market would develop.

Sommer sees this increased speed as a direct result of new-technology companies recognizing market opportunities in “future mobility concepts,” resulting in billions of dollars of investment into the sector and ramping up expectations from automaker customers in the process.

On the environmental side, ZF is positioning itself as governments demand reductions in carbon dioxide and nitrogen oxide and as a growing number of cities attempt to be emission free.

“That means plug-in electrification takes a much higher share than we have expected four years ago,” Sommer says, predicting electric vehicles will achieve “significant” market share by 2025. “This is what we did not anticipate in this aggressive way into the future.”

The company’s push for zero emissions and zero accidents is embodied in a new concept car, Vision Zero, which will be unveiled at the Frankfurt auto show in September.

It took 18 months and 100 engineers to complete the concept car, which employs three cameras and one radar sensor, a 33-kWh battery and an interior camera to detect when the driver is distracted, triggering a series of warnings.

With forward-facing cameras to read road signs, as well as mapping information, the Vision Zero vehicle identifies when the driver has turned the wrong way into traffic and will automatically apply the brakes.

Mapping information also makes it possible for the vehicle to automatically slow down when approaching speed bumps. ZF’s latest Active Kinematics Control allows 7 degrees of articulation for the rear wheels, enabling the vehicle to steer easily around objects in the road.

Hella, Astyx and the other new technology partners did not contribute to the concept car.

In a test drive at an Austrian track near here, the Vision Zero vehicle steers itself, accelerates, slows down as turns approach and seems to be well attuned to its surroundings.

But this is a controlled environment, with no other vehicles nearby or traffic lights or people riding bicycles along the curb. The road to autonomy remains long, but ZF’s new concept is heading in the right direction.