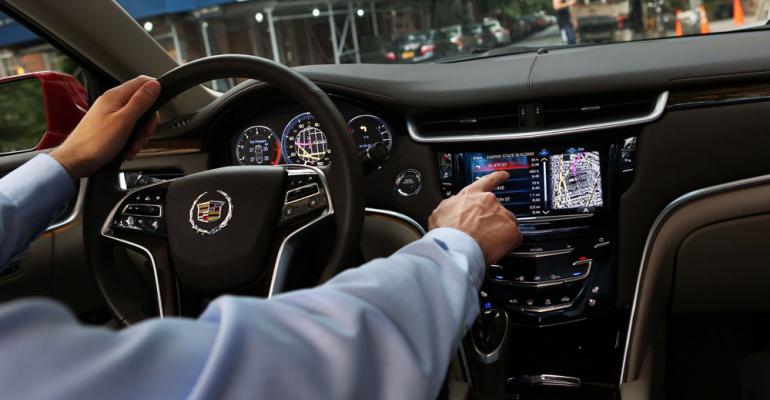 Several features are to be disabled unless the vehicle is in park, including manual text entry for messaging or internet browsing, any video and display of text in messaging, Web pages and social media.

New voluntary guidelines issued by the U.S. Department of Transportation today call for auto makers to limit tasks potentially distracting drivers to less than 12 seconds and prohibit onboard applications that allow texting and Internet surfing while the vehicle is moving.

The National Highway Traffic Safety Admin., which was responsible for developing the guidelines, says it will evaluate the level of compliance over the next three years as auto makers have the opportunity to phase in new technology as they roll out new models.

The guidelines follow closely along the proposal put forth last year for public review, which drew comments from 83 groups and individuals, including U.S. auto makers.

Also factoring into the final guidelines was a month-long NHTSA study of cell-phone use by 204 drivers. NHTSA says the study shows using a cell phone while driving doubles the probability of a crash.

The NHTSA guidelines are released the same day of a Texas A&M study that shows there is no real safety advantage when using voice-to-text commands to operate handheld devices while driving.

NHTSA Administrator David L. Strickland says he expects auto makers increasingly to move toward voice-operating systems for onboard devices and says the findings from the Texas A&M report aren’t a deterrent to that because the university’s study focused solely on handheld devices.

The agency also is looking into guidelines or regulations concerning the operation of cell phones while driving, but isn’t prepared to issue any proposals.

The Global Automakers group of international vehicle manufacturers issues a statement supporting the guidelines, but continues to push for a companion rule for handheld devices.

“Global Automakers supports bans on the use of hand-held devices for texting and phone calls while driving,” the organization says. “In our view, to be effective, the NHTSA guidelines should be comprehensive and address these portable devices as well.”

Several features are to be disabled unless the vehicle is in park, including manual text entry for messaging or Internet browsing, any video and display of text in messaging, Web pages and social media. The limit on video would not restrict the display of interactive maps used in navigation devices.

NHTSA studies show texting takes a driver’s eyes off the road for 23.3 seconds, doubling the risk of crash, and such tasks as looking up a contact number on a handheld phone can increase risk of collision by three times.

Drivers will be allowed under the guidelines to select a pre-set destination into the navigation system while the vehicle is moving.