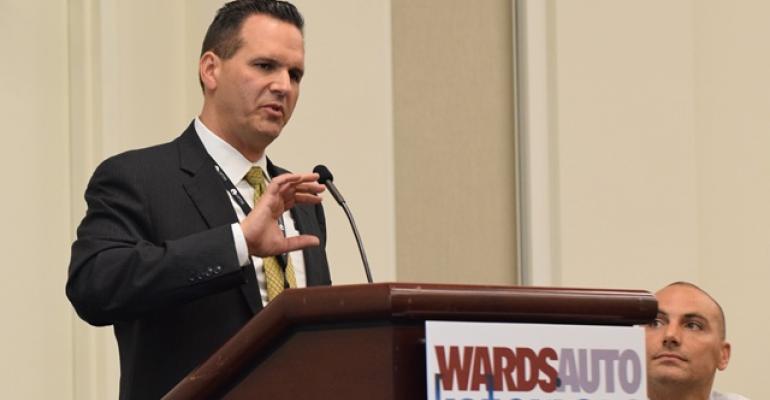 Cars Lose Weight, One Part at a Time

Auto industry concentrates more than ever on designing weight out of vehicles.

DETROIT – A car consists of thousands of parts, large and small, and they all are fair game in today’s quest to make vehicles lighter.

“Lightweighting” is a hot topic in the auto industry as it tries to meet ambitious government fuel-economy mandates. One way to do that is to reduce mass. That’s being done, seemingly one part at a time.

Designers discuss some of those individual weight-loss plans during a session at the 2015 WardsAuto Interiors Conference.

Consumers may not necessarily connect all the dots, but they’re for making vehicles lighter, says Jeff Lambert, vice president-engineering at Magna, an interiors supplier. “They want better fuel economy.”

Automakers are concentrating more than ever on designing weight out of vehicles. “Our customers take lightweighting seriously, so we do too,” Lambert says.

He describes a “holy grail” of his business: making a seat that’s lighter, more functional and allows for ancillary weight losses elsewhere in the interior.

One way to make car seats less heavy is to combine functions of internal workings. Another way is to use smaller, yet stronger parts. Lambert shows a seat-adjuster disc as an example of that.

Also aiding the cause is a lightweight track. It makes sliding the seat easier and, consequently uses an assist spring that’s smaller and lighter.

Supplier Faurecia is lightening up instrument and door panel crossbeams. One made of a carbon-fiber composite would provide a 40% weight reduction. It’s due out in 2018, says Brett Schnur, Faurecia’s innovation project leader.

He also touts the lightness of a new product, NAFIlean. It’s a polypropylene with 20% natural fiber compound. It’s an injected molding in door and instrument panels. Currently, it’s in one European car, the Peugeot 308.

The auto industry’s lean regimen goes beyond just reducing physical mass. It also extends to design and to customer perceptions, says Julien Montrousse, Mazda North American’s interior design manager. “When you sit inside a vehicle, you should understand it is lightweight.”

On the other hand, a slimmed-down car should convey a sense of stability, rather than an unbearable lightness of being.

It shouldn’t look like it will blow off the road, says Rusty Mansel, Henkel’s business manager-automotive interior.