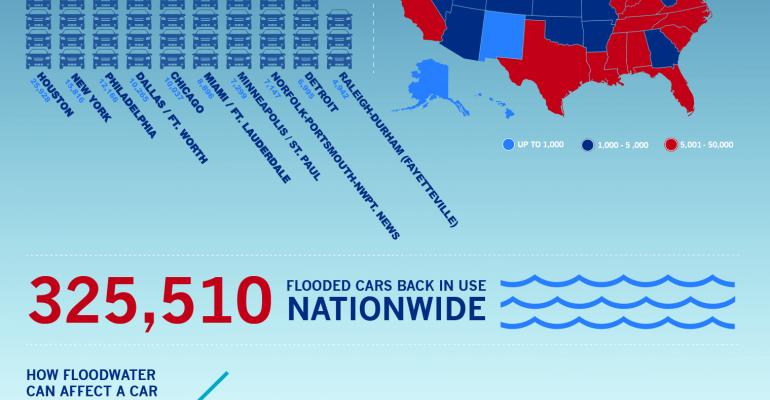 &ldquo;Flooded cars rot from the inside out as water corrodes the mechanical parts, shorts the electrical system and compromises safety features like airbags and anti-lock brakes,&rdquo; Carfax says. Health concerns are an added problem.

There are an estimated 325,000 previously flooded cars on U.S. roads, up 20% from 2016, and that number could grow by several hundred thousand in the wake of hurricanes Harvey and Irma, Carfax says.

In a news release, the provider of vehicle-history information cites data from state motor-vehicles departments, insurance companies and other sources, and says the state with the most vehicles reported as damaged is Texas, with 51,000. Ranked second with 29,000 is Louisiana, which along with Texas was hit hardest by Harvey.

Pennsylvania ranked third with 20,000 flood-damaged vehicles, followed by Florida (19,000) and Kentucky (16,000). Historically, about half the vehicles damaged by floods end up back on the market, Carfax says.

“I bought a car last year and the seller never told us anything about it being a flood car,” the release quotes Pennsylvania resident Charlene Geiger as saying. “When we got home and ran a Carfax (vehicle-history report), there it was – a flood car from Hurricane Sandy. It showed that the seller bought it as a salvage car and the title was washed when he brought it to Pennsylvania. We lost $16,000 over all of it.”

According to Consumer Reports, title washing is a scam in which a damaged vehicle branded as junk in one jurisdiction is registered in another, moving from state to state until one state with slightly different regulations brands the same vehicle as “salvage” but repairable.

“Flooded cars rot from the inside out as water corrodes the mechanical parts, shorts the electrical system and compromises safety features like airbags and antilock brakes. Health concerns are an added problem, as mold and bacteria permeate the soft parts of the car,” the Carfax release says.

“Our data shows there's still much work to be done in helping consumers avoid buying flood-damaged cars,” Carfax President Dick Raines says. “They can, and do, show up all over the country, whether it be a few miles or hundreds of miles from where the flooding occurred. With two devastating storms already this year, it’s vital for used-car buyers everywhere to protect themselves from flooded cars that may wind up for sale.”

Carfax is allowing consumers to check for flood damage at carfax.com/flood at no cost.

Thailand Auto Industry Back on Track After Floods
Jun 19, 2012