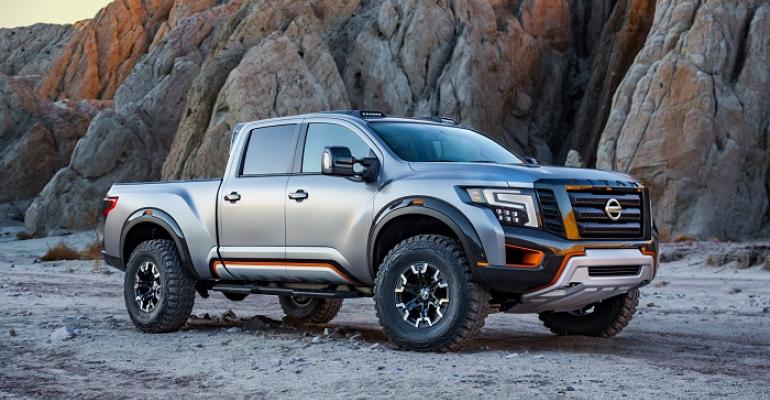 The concept truck is based on a standard-wheelbase Titan XD Crew Cab. It has the same overall length, but is almost 3 ins. taller and 6 ins. wider.

“Even though our all-new ’16 Titan XD just started arriving at Nissan dealers nationwide last month, we are already exploring new territory where Titan might go in the future,” Jose Munoz, chairman-Nissan North America, says in a statement.

The Titan Warrior concept is based on a standard-wheelbase Titan XD Crew Cab. It has the same overall length, but is almost 3 ins. (76 mm) taller and 6 ins. (152 mm) wider, the latter change to fit 37-in. (940-mm) off-road tires and a new, long-travel suspension.

Designers aimed for a modern armor appearance for the concept pickup, with “more technical, menacing” headlights and flared front and rear fenders.

Also upping its tough quotient is a large front skid plate, interlocking into the front bumper, and a hood vent to cool the concept truck’s 5.0L V-8 Cummins turbodiesel engine.

The Warrior pickup has a fully custom suspension, with custom upper and lower control arms with performance ball joints in the front and internal bypass reservoir shocks with custom reservoir mounts in the rear. The front and rear also get hydraulic pressurized bump stops.

The steering wheel is milled from one block of aluminum, Nissan says.

Auxiliary toggle switches and gauges allow for off-road accessories and monitoring of the truck’s performance.

The new Titan XD appeared to boost the long-lagging truck’s fortunes in December, with about 150 more units sold in the month compared with December 2014. For the year, Titan sales fell 3.1% to 12,140 units.

More versions of the Titan arrive soon, with a gasoline V-8 set to debut in Titan and Titan XD pickups in early spring.