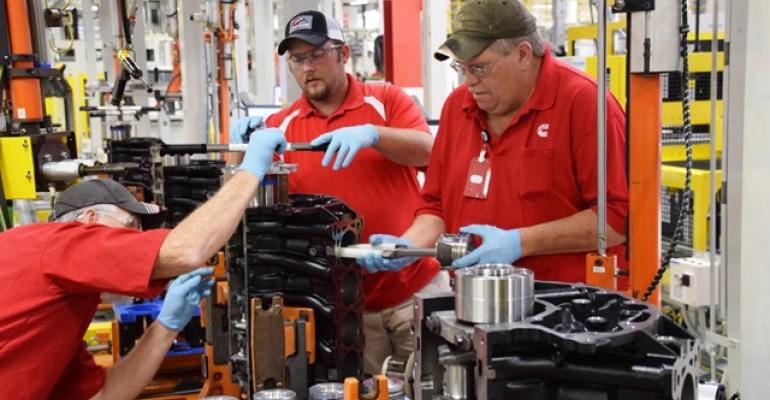 The Nissan Titan XD&rsquo;s new 5.0L V-8, supplied by Cummins, is intended to &ldquo;fill the diesel white space&rdquo; between heavy-duty and light-duty pickups.

COLUMBUS, IN – Fullsize pickups come in a dizzying array of body and powertrain configurations, so automakers are hard-pressed to introduce something that hasn’t been tried before.

But Nissan has a radical idea: a diesel engine that seeks the happy medium between heavy-duty stump pullers and light-duty gasoline engines that propagate fullsize pickups. Both vehicle segments, by the way, are dominated by Detroit metal from General Motors, Ford and Chrysler’s Ram brand.

Nissan’s new strategy is taking shape here, south of Indianapolis, in the same building where diesel specialist Cummins has been producing engines since 1927.

A 5.0L DOHC diesel V-8 with a 2-stage turbocharger inches down the assembly line here in pre-production mode, gearing up for a promised launch by the end of this year. Nissan announced two years ago it will use the 310-hp Cummins V-8 in the all-new Titan XD, its first attempt to edge into the heavy-duty pickup sector.

Truck customers needing more torque from Detroit brands had to step up to heavy-duty diesel pickups that are heavier and more expensive but capable of pulling horse trailers and mobile homes.

Nissan says many truck buyers don’t need to tow quite that much and want an alternative. Rich Miller, Nissan’s chief product specialist for Titan, says the new engine is intended to “fill the diesel white space” that exists in the market.

Exactly how much the new Cummins diesel can pull remains a mystery as Nissan will clutch that information as long as possible, hampering the Detroit brands’ ability to respond.

For marketing purposes and bragging rights, Nissan’s new Cummins engine will have to bring more to the party because that’s the primary reason to buy a diesel. Customers likely will have to pony up several thousand dollars for the Cummins V-8 option. Nissan has yet to announce pricing.

For comparison, the smaller 3.0L V-6 in the Ram 1500 EcoDiesel, a 2-time Ward’s 10 Best Engines winner, carries a $4,700 premium, and a lot of Ram loyalists appear willing to pay it. Whether Nissan customers will be as eager remains to be seen.

The Cummins diesel V-8 may be new, but the engine program spans 12 years, back to the time when the U.S. Department of Energy subsidized industry research toward marketing efficient, modern light-duty diesel engines for pickup trucks. GM, Ford and Chrysler had programs as well, but they were shelved when the recession hit in 2008.

Cummins stuck to its knitting, talking with multiple automakers interested in light-duty diesels. It helped that Cummins also had non-automotive customers, such as bus, motor home and delivery fleets, eager to source a diesel engine with similar displacement.

The result is the 90-degree 5.0L V-8 that Cummins calls the ISV. Production began here a few months ago for non-automotive customers such as Tiffin Motorhomes, and the same assembly line, with annual capacity of 150,000 engines, will produce the Nissan version as well.

Cummins can’t predict the production mix of the two engines, but Jeff Caldwell, the company’s general manager-global pickup and van business, says he expects Nissan’s share to be higher.

The Nissan and ISV engines spring from the same architecture, and more than 70% of their content is common. But the Nissan version has different turbochargers, intake module and an electrically actuated vacuum pump, in addition to unique tuning and calibration. Both engines have chain-driven valvetrains and composite valve covers.

The Nissan version employs a compacted-graphite iron block, without cylinder liners, from Tupy in Brazil. Cummins opted for CGI because it is twice as strong as cast iron, enabling thinner walls between cylinders, and a block that weighs half as much.

Aluminum cylinder heads come from Nemak in Mexico, while high-pressure common-rail fuel delivery is supplied by Bosch. The piezo-based fuel injectors are capable of up to seven injections per combustion event.

Bosch also supplies the ceramic glow plugs, which heat up in milliseconds and require no cycling before ignition on cold days.

The 2-stage turbochargers come from Holset, a brand acquired by Cummins in the 1960s. Most of the turbo assembly is done here in the engine plant.

Cummins says the smaller high-pressure turbo, with a compressor supplied by Mitsubishi, is active at launch, mitigating lag, while the larger low-pressure turbo takes over at higher engine speeds to ensure a long, flat torque curve.

Sophisticated electronic controls allow extensive modulation between the two turbochargers, depending on grade and the driver’s demands.

In a sense, the Cummins 5.0L V-8 will compete with its own product in the Ram, but Caldwell is hoping for a different outcome. “We want to take sales from GM and Ford, but not the Ram,” he says.

Like the other heavy-duty pickups, the Titan XD will occupy the EPA’s Class 2B for gross vehicle weights over 8,500 lbs. (3,856 kg). The designation requires no stated fuel-economy estimates on the window sticker.

It takes seven hours to assemble, test and validate the 5.0L diesel. Every engine undergoes cold and hot testing. Each engine runs for eight minutes at various speeds, including wide-open throttle.

The engine employs selective catalytic reduction to treat oxides of nitrogen emissions, but Nissan has not yet announced at which interval it will be necessary to refill the urea reservoir.

The V-8 runs on 10w30 oil, but Nissan will recommend synthetic 5w40 in especially cold temperatures.

As the engines are completed here, they are packed two at a time into steel shipping racks and then trucked 10 hours to Nissan’s assembly plant in Canton, MS.

The first-generation Titan launched in October 2003, shortly after its platform mate, the Armada SUV. This year through July, Nissan has sold a mere 7,500 of the outdated Titans.

This second-generation truck comes from Nissan’s 61 Platform, which will underpin both the new Titan and next-generation Armada, although a launch date for the SUV has not been specified. Nissan has no plans to offer the diesel in the Armada.

There will be two flavors of the new Titan, both from the 61 Platform. The diesel XD arrives first, followed by the light-duty truck, with gasoline V-6 and V-8 engines, later.

Journalists were not allowed to drive the diesel truck here, but an early production model was started and ran for an extended period.

Even without additional damping that is being added to the final version of the Titan XD, the truck is surprisingly quiet inside and out, while retaining its “diesel goodness,” as described by Cummins engineers.

Nissan Confident of Targets, Says Dealers Should Be Too
Jan 23, 2015