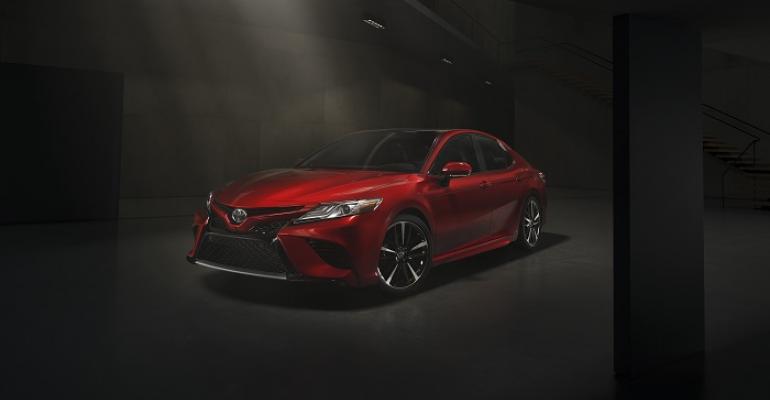 A new, direct-injected 4-cyl., futuristic design inside and out, plus more infotainment and safety technology, are due on the eighth-generation sedan.

DETROIT – Toyota unwraps the next-generation Camry here today at the 2017 North American International Auto Show, revealing a model that is sleeker and more technology-packed than its predecessors.

The eighth-generation Camry, on sale in late summer, rides on Toyota’s new TNGA global platform and features a new 4-cyl., as well as offers Toyota’s 3.5L V-6 with direct and indirect fuel injection first seen in the Tacoma pickup and Highlander CUV. The Camry also gets a redesigned interior and updated version of Toyota’s Entune infotainment.

Toyota did not provide images to media ahead of the Camry’s debut, but says the 4-door now has “aggressive character lines” and “a sensual athletic image.” The Camry platform is noted for its low center of gravity, making possible a sleeker, more futuristic look, the automaker says.

“The design team knew the TNGA platform provided them a great opportunity to pen a very expressive sedan, and they took advantage of this by getting the lines close to the ground and forming an energetic silhouette,” Toyota says.

Key design elements of the new Camry include a 2-piece grille with thick and thin portions, a lower hood and roofline than the outgoing model, and a “distinct crease” extending from “slim multicolor taillights down to the bumper, effectively pushing the wheels outward.” Toyota also notes the Camry’s logo has been redesigned.

Noise, vibration and harshness transmission into the cabin is lessened via a 4-point engine-mounting system, Toyota says.

These dimensional changes allowed engineers to lower the center of gravity and place seats lower, bringing about a lower heel point and more foot room for drivers, as well as better outward vision for passengers due to a lower hood, cowl and dashboard.

A lower beltline, repositioned A-pillar and side mirrors, as well as a smaller instrument panel also should allow driver and passengers to better see their surroundings.

Hallmarks of the new 8AT include direct lockup from second through eighth gears, “eliminating power loss from the torque converter (and) executing shifts like a high-performance automated manual gearbox.”

Toyota releases no horsepower or torque figures for either the 4-cyl. or V-6 in the Camry, but promises the former along with the 8AT should give the car class-leading fuel economy. Toyota says a next generation of the Camry Hybrid is due, with most details still to come. Toyota reveals the car will use the new 2.5L, while the Camry Hybrid’s battery pack moves from the trunk to under rear seats to enhance its center of gravity. Best-in-class fuel economy is projected.

The Camry’s interior is redesigned, also with a so-called futuristic appearance thanks to elements such as a “sweeping yet elegant character line that flows down from the instrument cluster and bisects the center console waterfall.”

Toyota says it used the highest grade of soft-touch materials throughout the car’s interior, which also has mixed color tones and hues inspired by home decorating.

Stitching is present on front and rear seats, with front seats also reengineered for ergonomics.

The Camry has the latest Toyota HMI, said to be minimally distracting, and three interlinked displays: a 10-in. (25-cm) color head-up display, a 7-in. (18-cm) gauge cluster information display, and an 8-in. (20-cm) display for audio and navigation with heating, ventilation and air-conditioning controls. The latter is presented in a flush-surface design.

An updated version of Toyota’s Entune multimedia system, Entune 3.0, debuts in all grades of the ’18 Camry. Cars with the V-6 have a new navigation system with improved map accuracy, Toyota says.

Remote start and door unlock capability are new to Entune, as are a guest-driver monitor and vehicle finder. Meanwhile, up to five mobile devices can connect to the car using 4G LTE.

The ’18 Camry is one of many Toyotas that will come standard with the automaker’s Safety Sense P suite of safety technologies (pre-collision with pedestrian detection, lane departure alert with steering assist, automatic high beams). Some models also receive standard blindspot monitor with rear-cross-traffic alert.

The Camry is the best-selling car in the U.S., although sales dipped 9.5% last year, falling below 400,000 annual volume for the first time since the economic downturn. The car’s drop is reflective of the downturn in midsize sedan sales overall, as midsize CUVs have become the dominant vehicle type since the Camry last was fully redesigned in 2011.

Sales in WardsAuto’s Middle Car segment, home to the Camry, fell 11.3% last year to 2.6 million units, while Middle CUVs, such as the Highlander, rose 3.4% to 3.3 million units.