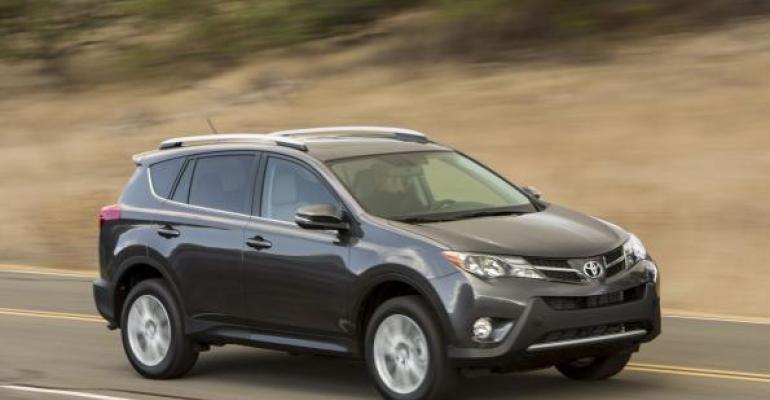 DETROIT – Toyota is aiming for segment leadership in the U.S. with the RAV4, vowing to sell 400,000 units annually by 2017 and overtake the Honda CR-V, the longtime leader of WardsAuto’s Middle CUV group, selling 345,647 units last year.

The brand has seen sales of its compact CUV increase sharply in recent years thanks to a ’13 redesign and greater North American production capacity, as well as Japan imports.

Does Toyota envision a day when the RAV4 could overtake the Camry midsize sedan as its No.1-selling model?

“If midsize car continues to outflow, we may end up selling a few less Camrys as time goes on,” Bill Fay, senior vice president-Toyota Div. for Toyota Motors Sales U.S.A., tells WardsAuto here in an interview.

“Over time, there might be a closer correlation to Camry and RAV sales, but I would like to continue to make sure Camry stays a success in the marketplace,” he says.

One way Toyota kept Camry volume up last year was with fleet sales. Deliveries to fleets typically comprise 10% of the annual volume of a Toyota model, but Fay ballparks Camry’s fleet mix last year at 17% or 18% of total sales.

CUVs have become so popular in the U.S. that Toyota last year struggled to fill demand.

As it has made a variety of production changes to boost capacity of the hot sellers, he says Toyota’s 2016 light-truck supply should be sufficient to meet most of the customer demand.

CH-R Only Small CUV on Horizon

The Toyota brand is one of the largest in the U.S. without a small CUV.

And it looks like that will be the case for a while.

As tempting as the segment may be, Fay says the automaker is willing to let its Scion youth brand grab the potential volume.

At last year’s Los Angeles auto show, Scion revealed a small CUV concept, the CH-R, which is due to market as a production model in 2017.

“We can do a good job covering (the segment) with CH-R,” Fay says. “We’ll keep an eye on (the sector) and see if we have to zigzag at all or turn on that strategy.”

Small CUV posted the largest increase among all WardsAuto segments last year, up 56.6% to 759,106. That jump largely can be credited to a slew of new players.

Also new to the group were the Chevy Trax, Jeep Renegade and Mazda CX-3.

Scion officials at the CH-R’s L.A. unveiling said the quirky concept was a 90% approximation of the production model.

The brand gave no guidance on sales, except to say it expected the production CH-R to become its No.1-selling model.

Toyota may be moving in a different direction from Nissan, which has a similarly wildly styled small CUV, the Juke. Rumors suggest Nissan may ditch the Juke for a model with a more mainstream appearance.

Nissan’s U.S. product planner told WardsAuto last week the automaker was considering the Brazilian Kicks small CUV for the U.S., and that the Juke may be put out to pasture.