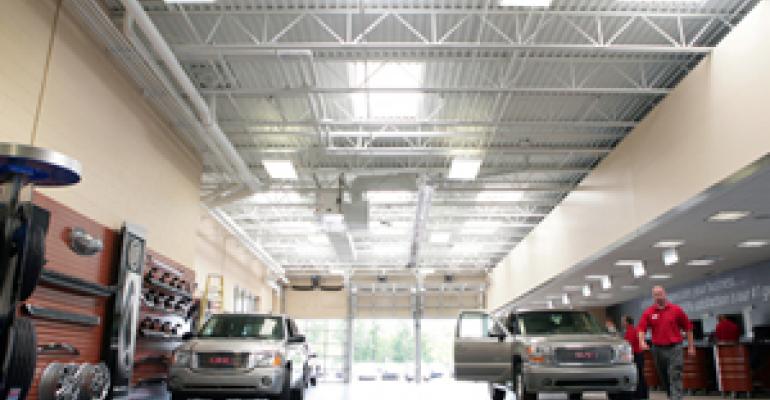 Resembling a 5-star hotel’s lobby, the opulent showroom section of Newport Lexus includes a cafe, grand piano and leather chairs in front of a fireplace.

But in planning the $75 million facility in Newport Beach, CA, the David Wilson Automotive Group also paid particular attention to a less public part of the dealership: the service department.

It’s a vast area with 77 bays and 103 lifts. The bays are pre-stocked with parts for the 18 most-common work orders. That gets cars in and out fast. So does a 7-lane service drive designed for speedy intake.

“If we can turn the serviced car around in 90 minutes and keep the customer comfortable here with all the things there are to do, that’s one less loaner to send out,” Craig Whetter, the group’s executive vice president, tells Ward’s in an earlier interview.

“It’s an environment you almost look forward to coming to, rather than feeling like, ‘Gosh, I’ve got to take my car in for service,’” he says.

The store’s fixed-operations fixation is not just because dealer principal Dave Wilson started out doing oil changes and lube jobs at an Arizona dealership before going on to build his 16-dealership group based in California.

The back shop is a strong profit center for Newport Lexus, No.116 on this year’s Ward’s Dealer Service 150, a listing of U.S. dealerships with outstanding service and body-shop operations as well as parts and accessory sales.

The Newport store had fixed operation revenues of $17.6 million last year, 13% of the dealership’s total revenues.

The Ward’s Dealer Service 150 is a spinoff of the Ward’s Dealer 500, a listing of top dealerships in the nation. The 150 standout service performers took in $3.3 billion in fixed-operations revenue,17.6% of their total revenues in 2010.

It’s not just the public lounges that have become attractive. So have many dealership service work areas.

Many dealers make it a point to keep those places clean and orderly both to provide a good work environment and present a positive impression to customers.

Some customers may never see those facilities. But if they do, many dealers want to make a good impression. Disorderly work stations suggest potentially disorderly work on their cars.

“My goal is to present the best image we can for the customer, and that means having the best equipment, the best tools and the best facility,” says Tyler Benson, who runs the service department at his father’s Hyundai store, Brad Benson Auto Group, in South Brunswick, NJ.

When Subaru of Plano, TX, was built five years ago, big windows were installed in a wall separating the service lounge and the 18-bay shop area. In the spirit of openness, the idea is to let customers look in on the “operating room.”

The service department always has been a dealership profit center. But when new-car sales fell dramatically in 2008 and in 2009, dealers cranked up their back-shop operations to offset the showroom revenue declines.

Stephen Wade, chairman of the National Automobile Dealers Assn. and a Utah dealer, says he bought a store in California because he was attracted to its 85% service-absorption rate.

Car dealer bliss comes with a 100% absorption rate, a point at which fixed-operation profits cover the costs of all the other dealership departments. Few dealers hit the magical 100 mark, but some come close.

“Parts and service are critical to dealer success,” Wade says. “Those are your constants.”

He didn't consider them so important when he became a dealer 40 years ago. “If they had said back then, ‘You won't have a parts and service department,’ I would have said, ‘OK.’ Today, the body shop, service department and parts department bring me home.”

But first they must bring in the customers. Many dealerships now market their service operations like never before, using customer-relationship management systems to identify prospects and make it easy for them to schedule appointments.

“All the means are in place to deliver service messages and for customers to go online to schedule service appointments and then get reminders,” says Kevin Henahan, senior vice president-marketing strategies for ADP Dealer Services.

After the car is serviced, the dealership sends the customer a digital message saying the car is ready, “and then, with a click of the button, the customer can pay online,” he says of an impending ADP offering.

“Fixed ops is where it’s at,” says Casee Hamilton, an automotive CRM consultant for the VanTuyl Auto Group.

She is part of a team that is leveraging CRM to boost service business for the Phoenix-based dealership group’s 67 stores, several of them on the Ward’s Dealer Service 150, including No. 25, Toyota of Richardson (TX). It posted fixed-operation revenues of $30.7 million, 13.8% of total revenues, in 2010.

In introducing a service-oriented CRM enhancement at VanTuyl, “the biggest thing was getting buy-in from the service directors,” Hamilton says at a user conference put on by the CRM firm DealerSocket in Dana Point, CA.

The system allows service advisors making appointments to type in customers’ names and retrieve detailed information ranging from vehicle service histories to whether the customer prefers shuttle service to the number of cars associated with a particular customer.

The Dealer Dashboard also provides declined-service records, from which service managers can upsell work, such as overdue 35,000-mile maintenance visits.

After an appointment is set up, a confirmation message and calendar item is sent to the customer’s mobile phone or PC. The customer can go to the dealer’s website, log on and review the likes of appointments and service histories.

Most Van Tuyl service advisors have warmed up to the system because it puts them in a position to sell, “rather than just be order takers,” Hamilton says.

But she and colleague Tricia Jurkoshek have encountered some resistance in implementing the new process throughout the dealer group.

“I’ve had some one-on-one battles with service advisors,” Hamilton says. “One old-school advisor asked, ‘Why are you making me do this?’ But when he discovered the benefits and saw that customers liked it, he changed his mind.”

It’s not like the resisters have a choice, though. “We’ve locked advisors into it,” she says. “It’s the only way they can make an appointment.”

Typically, a dealership’s primary service customers are people who purchased vehicles at that particular store. But one way to build the service-department customer base is to go after consumers who ultimately didn’t buy a car from you, but were once sales leads, says Peter Ord, a DealerSocket trainer and business developer.

He cites a Texas dealer who, upon learning in follow-up calls that a prospect bought a vehicle elsewhere, sends a marketing message to that person, essentially saying, “Sorry we lost your business on the sales side, but we’d love to have you as a customer on the service side.”

Coupons and special offerings can help lure in those types.

Many times, the dealership closest to people’s residences gets their service business, Ord notes. Customers may drive an extra mile to buy a car, but many dislike long trips to the dealership for repair and maintenance work.

When offering specials, dealerships should hike up the incentives to customers who previously spent a lot of money on major repairs, Ord says.

Offering more-generous coupons and discounts to those people lessens the sting out of the previous repair bill, he says. “It counterbalances data showing that if someone spent a lot on repairs, there is a greater chance of losing them as a customer.

“Should you treat a customer who had transmission work the same as someone who had an oil change? No.”

Numbers-cruncher R.L. Polk says high repair bills can reduce overall customer loyalty to the point of even decreasing the chances of someone going back to the dealership to buy a car.

Every additional $250 on a repair bill reduces customer loyalty by 0.15%, Polk says.

Although a dealership needs to retain the big spenders and regular clients, it also needs to keep in mind consumers it hasn’t seen in a while, says Mike DeCecco, director of industry relations and marketing for Dealer.com.

“Why wouldn’t you send a very impressive special to someone who hasn’t visited the dealership in over a year?” he says. “Do you have anything to lose? You’re off their radar.”

“Twenty-three percent of customers who enjoy a service relationship with us buy another car from us,” he says. “Our eyes opened wide on that one.”

That’s why service advisors and showroom sales people should work as a team, introducing their customers to each other. That sounds logically, but it can present an “inherent conflict,” he says.

A service advisor may balk at facilitating a new-vehicle purchase, because the newer the car, the less service it typically requires.

“Service advisors might not want to give up a customer to the sales department because they lose that person as a service customer,” Dobry says. “How do you compensate for that?”