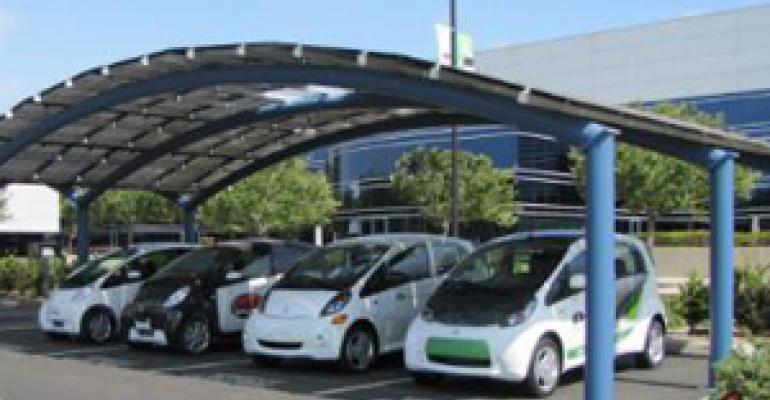 Mitsubishi is a big proponent of &#8220;smart-grid&#8221; technology, where electric vehicles with extra power in their batteries can return juice to the grid when they are not on the road. OKAZAKI, Japan – A plunge in the popularity of nuclear power following the disasters in Japan earlier this year will not stop auto makers from achieving truly emissions-free vehicles, but it does underscore the need to diversify power sources, Mitsubishi’s electric-vehicles chief says.

EVs are cheaper to run than their internal-combustion counterparts and emit no tailpipe emissions.

But in most regions of the world they still rely greatly on power generated from coal-fired plants.

As such, increasing the availability of nuclear energy was seen as a clean alternative, until the Fukushima disaster reminded the world of its dangers.

One of the world’s largest nuclear-power facilities, Fukushima spewed radiation after the quake and trigged a massive evacuation around the site. It likely will not reopen.

Japan since has shutdown other nuclear plants in the country, throwing the region into an energy crisis.

Auto makers attempting to restart production now must close their operations for two days at mid-week to conserve electricity, at least through the summer.

Office temperatures are set at 83° F (28° C) during work hours, and employees use laptops and desk lamps, instead of desktop computers and overhead lights.

Other former proponents of nuclear power, such as Germany, now plan to abandon the energy in favor of tapping solar and wind sources for greater sustainability.

The new dynamic has particular recourse for Mitsubishi, which plans to remake its brand image in the coming years as an alternative-propulsion pioneer.

But it will be tougher sledding for the auto maker if environmentalists continue to slap the “coal car” moniker on EVs.

“We can switch to renewable sources, like solar,” Nakamura tells Ward’s during an event here showcasing the Mitsubishi i-MiEV. The fully electric A-segment car already is on sale in Japan, Europe and Australia and coming to the U.S. in November, as the auto maker’s first salvo in an EV and plug-in-hybrid offensive over the next few years.

At a convenience store in nearby Kyoto, a Level 2 charging station capable of taking an i-MiEV’s depleted battery to 80% capacity in 30 minutes draws all of its power from solar panels on the station’s roof. Super capacitors store energy for the charger.

That makes Mitsubishi a big proponent of so-called “smart-grid” technology, where EVs with extra power in their batteries return juice to the grid when they are not on the road, providing the bits of energy people need when those renewable sources are scarce.

“Even sustainable energy is not stable,” Nakamura says. “We have to fill the gaps. We’ll have to store energy, and the EV can play a role” through use of the smart grid.

However, smart-grid technology remains under development by power companies and none of today’s EV are capable of discharging power. Renewable-energy generation also is in its infancy.

Nakamura says EVs capable of returning power will come “very soon.” In fact, Mitsubishi’s technical center here in the hub of Japan’s auto industry already does it through a joint program with the Tokyo Institute of Technology.

“When I was put in charge of (Mitsubishi’s) electric vehicles, I thought maybe in 10 years. But now I think differently,” Nakamura says. “We have to accelerate the arrival of those smart-gird cars.”

The EV chief is calling on other auto makers, power companies and academics worldwide to combine their resources and make smart-grid technology a reality.

“The world needs only to look to Japan for motivation,” Nakamura says.“We learned a lot from the disaster. People said they needed first a battery for their phone to get information. The next thing they needed for survival was a hot meal and power to boil the rice.”