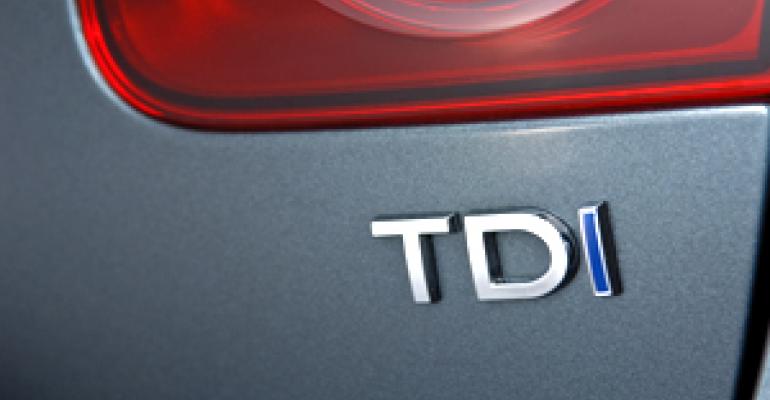 Diesel to Have Its Day in U.S., Proponent Says

Stiffer mileage targets and the marketing success experienced by some European auto makers are fueling interest in the engines, the U.S. Coalition for Advanced Diesel Cars contends. CHICAGO – The formula for diesel vehicle growth in the U.S. comes down to a simple equation.

As the number of auto makers selling diesels increases, the number of motorists buying them will increase, too, insists Jeff Breneman, executive director of the U.S. Coalition for Advanced Diesel Cars, which represents suppliers to diesel producers.

Breneman tells a meeting of the Midwest Automotive Media Assn. here this week that pending government legislation requiring auto makers to obtain 54.5 mpg (4.3 L/100 km) from their vehicle fleets by 2025 has helped stoke interest in oil-burners.

But, he adds, the fact European auto makers selling diesels in the U.S. have seen unexpected demand fueled by consumer concerns for great mileage and travel range between fill-ups has prompted other car manufacturers to offer diesels in the U.S. as well.

The list includes a Mazda6 diesel planned for 2012 and, more importantly, a diesel Chevrolet Cruze slated for 2013.

An offering from General Motors’ volume division gives the diesel credibility and endorses the engine as a viable alternative to hybrids or electrics, Breneman says.

Breneman says the key to growth is availability, and that will be favorably affected by more auto makers offering more diesel models here soon.

“When given a choice between a diesel- or gas-powered Jetta, 33% of motorists opt for the higher-mileage diesel. But when the supply of diesels is gone, it takes at least six to eight more weeks for the boat to arrive with a fresh supply,” he says, adding he hopes shortage issues will be solved with more players in the game.

The 54.5-mpg mileage standard is just one reason for future growth.

“Emission regulations are now about the same in Europe and the U.S., even California, so it makes it economically feasible for auto makers to develop one product for all those markets,” he says.

“And with the 54.5-mpg regulation coming in 2015, the auto makers have a 14-year window to invest the capital in diesels without U.S. regulations pulling the carpet out from under them.”

Another positive influence is infrastructure, with 80,000 U.S. service stations, or 52%, having a diesel pump.

By comparison, electrics require costly charging stations short distances from one another, and only about 1,000 are in place, Breneman says.

Fortunately, many consumers are too young to recall GM’s failed attempt at offering diesels in the 1980s, he adds.

“They don’t remember the GM experiment, but are old enough to recognize the Volkswagen Jetta and Passat (in diesel version) as great cars.”

Breneman insists diesels deserve a chance that the government has been reluctant to give them.

“We’ve had the flavor of the month from our government for decades,” he says. “Once it was going to be hydrogen fuel cells and a hydrogen highway, but that was proposed 11 years ago and where’s the first hydrogen-fuel-cell car?

“There also was going to be ethanol cars and hybrid cars and electric cars. The government has always told us what technology it wanted, but what we are saying is. ‘Tell us you want 50 mpg fuel economy and let us decide the technology.’”