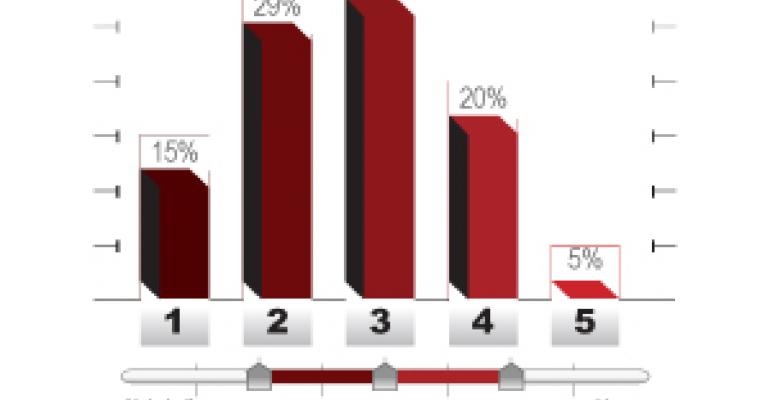 &#8220;Regardless of what the Union of Concerned Scientists says, it is a MAJOR STRETCH,&#8221; one engineer writes. Legendary engineer and inventor Charles “Boss” Kettering is famous for saying: “The price of progress is trouble.”

And trouble is what most automotive engineers and designers see on the horizon with proposed 2025 corporate average fuel economy rules.

Nearly 1,100 engineers and designers who currently work at auto makers and suppliers express doubts about being able to meet the target without affecting vehicle safety, size and cost. The WardsAuto survey was conducted by Paramount Research and sponsored by DuPont.

While environmental groups such as the Union of Concerned Scientists and the Natural Resources Defense Council claim a corporate fleet average of 60 mpg (3.9 L/100 km) or better could be reached with currently available technology, only one in four automotive engineers and designers agree.

For instance, respondents were asked to indicate their confidence in the currently available materials portfolio to help them achieve the new CAFE rules. Only one in 20 (5%) indicates they are very confident.

“Regardless of what the Union of Concerned Scientists says, it is a MAJOR STRETCH,” one engineer writes.

Nevertheless, engineers’ basic concerns remain the same: The groups lobbying hardest for the highest CAFE numbers seem to be focused only on efficiency, while engineers and designers are gravely concerned about unintended consequences regarding safety, higher costs and negative reaction from consumers who may not understand that efficiency comes at a price.

“A C-segment car will be considered huge by 2025; bye bye to the CUV/SUV, light-duty pickup trucks and D-segment or larger cars,” another says.

Gradually improving average fuel economy 5% per year for cars and 3.5% for trucks may sound easy to some politicians and environmentalists. But the experts tasked with actually doing the job cite hundreds of examples of how hard it is to squeeze even tiny improvements from vehicles and powetrains that consumers expect to perform flawlessly for 150,000 miles (241,000 km) or more.

Engineers are anxious about the durability of small-displacement, high-revving turbocharged engines and the impact on warranty costs; they worry about how hybrid-electric and electric-vehicle batteries perform in cold weather; designers worry about aerodynamics forcing them to create vehicles that look too much alike; manufacturing engineers fret about developing economical production and fabricating processes for advanced high-strength steel, aluminum and plastic composites.

In all, survey respondents left 100 pages worth of comments.

“Consumers don’t understand what this will cost, and environmental groups don’t care,” is a typical comment.

“Aerodynamic blobs on the way,” another quips.

Eight out of 10 responders say cost is one of their top two criteria when deciding whether to adopt a new technology that impacts production and manufacturing.

Even more importantly, less than one in 10 designers and engineers believe new fuel-economy rules are being drafted with the idea of accommodating future safety standards. These new rules will mandate better crashworthiness, stronger body structures and more airbags and electronics that will add weight and cost to future vehicles.

A whopping 77% of respondents agree that the originally proposed 56.2-mpg bogey “will fundamentally change how vehicles are manufactured in the U.S.”

When it comes down to the details of actually hitting the 2025 goal, most agree the powertrain will have to be the main focus, with a heavy shift to HEVs.

Almost half say the powertrain will be the vehicle system most affected; another one in five (22%) indicate chassis and slightly less (19%) mention body exterior.

Most of those surveyed believe the marketplace and technology should be the primary influencers on powertrain policy, but say the government currently is pulling the strings.

“Anytime government regulates industry, the outcome is usually disastrous. (Government regulators) are pushing for electric cars that are not feasible except possibly for urban commuting unless there are major new technologies developed that address range and costs. Ultimately, the government will drive the market to subcompact cars to support their agenda,” a respondent says.

However, other respondents point out that governments in most major industrialized countries stimulate demand for efficient vehicles with high taxes on fuel and various other levies related to carbon-dioxide emissions.

For materials, aluminum is rated as likely being the most helpful with meeting the new CAFE regulations. Slightly fewer responders indicate plastics or carbon-fiber composites. Magnesium is rated as the least helpful material.

Even so, engineers express concerns about all the materials. Issues involving high cost, welding and joining problems and availability are mentioned over and over again.

“There are huge pressures from the OEMs to reduce costs, and I don’t see how using new, exotic, lightweight strong materials will support their initiatives for reducing costs as well as switching the supplier landscape to have enough capacity,” one engineer says.

A large number of comments suggest the best approach to creating lighter vehicles will be using a blend of diverse materials.

Despite the skepticism and lots of griping about government meddling, there still are a significant number of optimists among those who responded to the survey. Many of those individuals say the industry has done a brilliant job creating big 5,000-lb. (2,268-kg) vehicles that are fast and efficient for their size, but now it is time to see what it can really do with smaller vehicles.

No matter where they stand on the new CAFE rules, engineers and designers working in the industry today say more has to change than just the vehicles. Auto maker technology investment strategies and business plans need to change as well, they say, not only to meet the new CAFE numbers, but to face many future challenges.

For one, auto makers now are too focused on short-term technology, respondents say. They must develop more balanced strategies of both short-term and long-term investments.

However, these insiders say the industry should make building the engineering talent pool a top priority as well as improving trust and working relationships between OEMs and suppliers.

They also say investing in emerging markets and restructuring, mergers and acquisitions should be last on the list of priorities.

The survey was conducted in mid July using standard online research practices. WardsAuto provided Paramount Research with a list of industry professionals. Two email invites were sent seeking participation. All email contacts included an opt-out link allowing respondents to remove themselves from the study. The survey remained open for two weeks, and 1,093 respondents completed the survey.