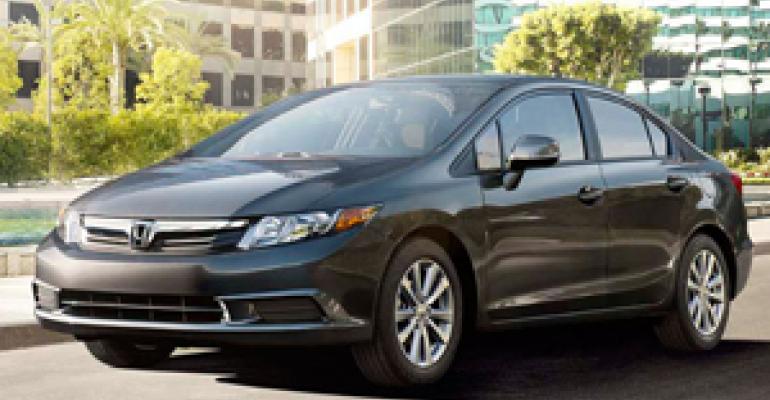 American Honda Looks Ahead to Better 2012

John Mendel blames Japan&#8217;s March earthquake and tsunami for sales losses this year, noting inventory of key products from the home country was slim to nonexistent. "Supply really whacked us," he says. CARLSBAD, CA – Calling 2011 the worst year during his time at the company, American Honda Executive Vice President John Mendel thinks the Japanese auto maker is about to turn a corner.

Improved inventory should lead to better sales this fall, he says. And new product, including the next-generation CR-V cross/utility vehicle and ninth-generation midsize Accord sedan coming next year, should make for a strong 2012.

"I think this month will be the first time we've had an opportunity to book an increase over last year since March, knock on wood," Mendel tells WardsAuto during a '13 CR-V media preview here.

The auto maker’s sales slid 5.8% through the year’s first nine months, WardsAuto data shows, with the Acura brand off 7.5% and Honda down 5.6%.

Mendel blames Japan’s March earthquake and tsunami for the losses, saying inventory of key products from the home country was slim to nonexistent. "Supply really whacked us," he says.

Although Honda builds the majority of the models it sells here at North American plants, still relies on Japanese suppliers for certain components.

The auto maker especially was hard hit when a microchip supplier to the new Civic compact car and CR-V was severely damaged by the Japan disasters. Honda's chip suppliers earlier had consolidated, leaving it with only one source for the unique chips.

Mendel says the shortage was why Honda fell behind Toyota and Nissan in returning to 100% production capacity in North America.

"The biggest single thing that I can point to was the two new models: The Civic and CR-V both use a (new type of) chip that was developed by one supplier (and) is shared by no other vehicle, and that plant was wiped out," he says.

"Everybody says, ‘Why are you so dependent on one supplier? We actually had three suppliers. But in short order, No.2 bought No.3, and then No.1 bought the new consolidated company. So in pretty rapid succession, it went from three to two to one, and we just couldn't react fast."

The lack of the microchips and the fact Honda already had ended production of its previous-generation Civic meant scant supplies of the car, the auto maker’s second best-seller in the U.S.

Honda was able to keep building the current CR-V several months longer than planned to soften the blow. But overall, the company will have lost 200,000 units of planned North American production and 100,000 sales for the year.

While some industry-watchers have put Honda on life support due to slumping sales and products that lack innovation and fall short of their competitors, Mendel remains upbeat.

He does not address criticism of the new Civic here. But earlier this fall he told employees in an internal Q&A posted on a Honda website that the negative feedback was more media- than customer-based.

Repeating Honda's philosophy of focusing on customers rather than competitors, Mendel insists the auto maker is on the right path. "It's about really delivering to the market what customers want," he says, adding "chest-beating targets" to outsell a particular competitor don't exist within the company.

Mendel acknowledges some OEMs are catching up, offering kudos to Korean brands Hyundai and Kia, as well as some domestics. But he believes customers will continue to trust Honda "for historic reasons and for new reasons."

Honda already holds its own against the Detroit Three in the light-truck segment, he says. Now that Ford and Chevrolet are offering more competitive compact cars, he believes Honda will continue to be strong in the C-segment.

"The success of manufacturers in any area we've historically dominated is one of necessity on their behalf," Mendel says. "They have to cross the same (fuel economy) hurdle in 2016 that we do. We're closer to that hurdle, but they can only do it by pulling a couple levers.