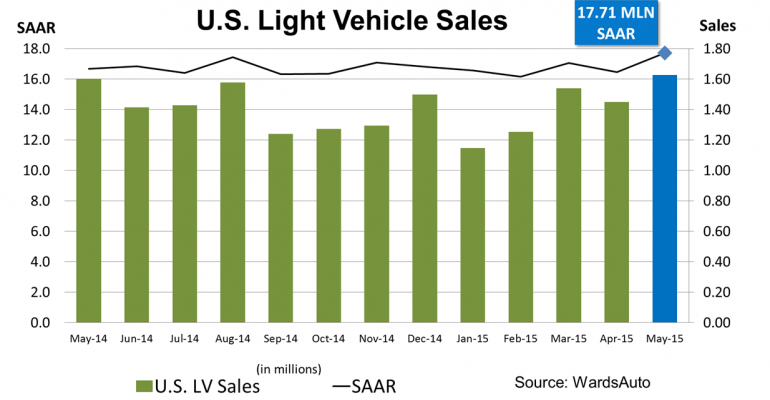 Higher fuel prices in May did not keep truck penetration from rising above year-ago for the 28th straight month, but large trucks posted their first year-over-year market-share decline since October.

May’s U.S. sales surged to the highest seasonally adjusted annual rate in nearly a decade, with CUVs and luxury trucks leading the way.

Sales ended the month with a 17.7 million-unit light-vehicle SAAR, highest since an incentive-induced 20.6 million in July 2005, and lifting the year-to-date to 16.8 million, compared with year-ago’s 16.1 million.

Some of the booming volume can be attributed to a small rebound from April’s 16.5 million-unit SAAR, which was slightly below trend. But the results predominantly reflect positive economic trends, such as job and income growth, combined with pent-up demand and low interest rates.

Incentives again did not appear to have a big impact on volume – although one third-party source reported an increase in 0% financing. Also, fleet volume, although estimated to have increased over year-ago, was not a determining factor in the month’s huge success. In fact, some automakers indicate that they intentionally capped fleet deliveries to devote more inventory to retail customers.

Huge truck penetration came despite fuel price hikes in May from April, including 13% in gasoline and 4% in diesel, based on government data. However, large trucks, including luxury vehicles, posted their first year-over-year market-share decline since October – 18.0% vs. year-ago’s 18.2% -- due to a 14.4% decline in Large SUVs.

Other than Ford, major automakers with a bigger mix of cars fared worse on their year-over-year comparisons than those with more trucks. High car mixes at Honda, Nissan and Toyota led to year-over-year gains below the industry average. General Motors and FCA US, which have a large majority of their mix in trucks, posted increases above the industry.

Ford, which still does not yet have full availability of its ’15-model F-150 pickup, recorded only a 2.6% gain over like-2014, despite nearly two-thirds of its mix devoted to trucks.

Car deliveries were nearly flat with year-ago as a 12.0% shortfall in the Large Car segment almost erased small increases in Small, Middle and Luxury Cars.