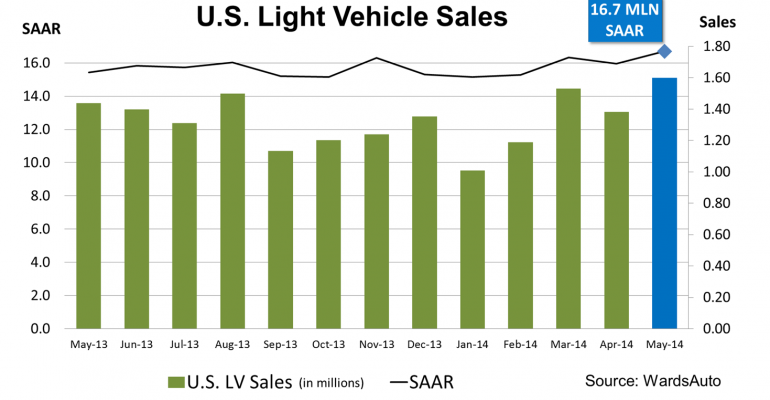 The prospect of a sharp rebound in second-quarter GDP helped underwrite May&rsquo;s solid results, and indicates June should post a still-healthy 16 million-plus SAAR, even if some of its thunder was stolen in the prior month.

With some goosing from post-holiday results, U.S. sales soared above expectations in May.

May’s seasonally adjusted annual rate of 16.7 million units was the highest since the same total in February 2007. The SAAR also was well above the prior month’s 16.0 million and same-month 2013’s 15.4 million.

Sales apparently started the month on a solid note, tracking toward a 16 million-or-better SAAR, then picked up during the Memorial Day weekend and continued at the holiday pace through June 2, which this year marked the end of the May selling period.

However, that left the question of how much payback, if any, there might be in June. If anything, June’s volume is likely to be below year-ago, because it has two fewer selling days than in 2013, but the SAAR could remain robust because the factors used to determine the annual rate take into account the difference in days.

There were no indications market incentives and fleet deliveries were a major driver behind the long-time-high volume, although third-party sources report industry discounting was slightly higher than May 2013.

Recent good economic news, including the likelihood of a sharp rebound in second-quarter GDP after negative growth in the first quarter, helped underwrite May’s results and foretell a healthy 16 million-plus SAAR in June, even if some of its thunder was stolen in the prior month.

Thanks mostly to CUVs and SUVs, combined results from all luxury segments continued to shine, with deliveries up 8.6% from year-ago.

Sales of small LVs – cars, CUVs and SUVs, including luxury makes – increased 10.1% from year-ago. After posting relatively flat growth most of the year, small LVs could be starting to benefit from higher gasoline prices, which have risen month-to-month for six consecutive periods through May, according to government data. It is the first time prices increased sequentially for six straight months since an 8-month streak ending in May 2011.

However, on a seasonal basis, small LVs tend to do well in May, and the upward spike could have more to do with that than consumer sensitivity to fuel prices.

Midsize cars continued to struggle relative to the entire industry. The segment group’s deliveries were up 2.2%, but market penetration dropped to 20.1% from 21.1% in May 2013.

Large pickups and SUVs did not fare as well as expected. The two segments usually post an increase in market penetration in May from the prior month, but Large SUVs recorded a flat share of 2.1%, with sales up a lukewarm 3.3%. Deliveries of Large Pickups declined slightly from year-ago and market share fell from April to 11.0%

Fiat-Chrysler maintained a string of year-over-year gains that started in April 2010, and Nissan now has 15 straight increases.

Honda increased its monthly sales 5.0%, posting only its second gain this year, but it did regain the No.5 slot in year-to-date sales from Nissan, which held the spot through April.

Other automakers with losses included Hyundai, Tesla, Volvo and Volkswagen/Audi.