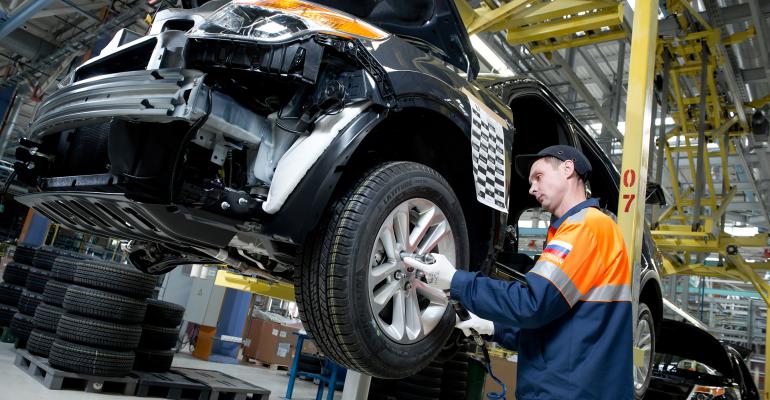 A spokesman says Industry and Trade Minister Denis Manturov endorses the tax break, as the automaker has suffered from the devaluation of the Russian ruble and an increase in the key rate of the Russian Central Bank.

ST. PETERSBURG – Amid the ongoing crisis in the Russian auto market, the government of the St. Petersburg region is providing additional benefits for the local Ford auto plant.

The Legislative Assembly has approved a bill reducing property taxes on the plant site by half. The 3-year tax break taking effect Jan. 1 is expected to save Ford RR53 million ($2 million) a year.

The tax cut will ‟ensure social and economic stability in the region and will help to avoid potential job cuts at the plant,” according to a spokesman for the St. Petersburg government.

According to a spokesman for Russian Minister of Industry and Trade Denis Manturov, the granting of additional benefits to Ford is the right decision, as the automaker has suffered from the devaluation of the Russian ruble and an increase in the key rate of the Russian Central Bank. Sales for the year’s first eight months were down 45.3% compared with year-ago, WardsAuto shows, but August deliveries of 4,527 units were up 17.5% – making Ford one of only three automakers whose Russian sales rose year-on-year on volume of more than 1,000 units.

Ford announced a 35% reduction in its Russian staff on April 1, 2014 and since then has interrupted production several times due to low demand.

Ford’s biggest hopes are for its SUV range, sales of which have significantly increased in Russia in recent years. The automaker’s current line of utility vehicles in Russia includes the Ford EcoSport and Kuga CUVs and the Explorer SUV. In the first eight months of 2015 utility vehicles accounted for 36.8% of Ford sales in Russia, compared with 30.5% in like-2014.

Since the beginning of the year Ford has launched production of four new models in Russia, the Transit, Fiesta, Focus and new-generation Mondeo.

In additon, the automaker on Sept. 3 launched production at its new engine plant in Yelabuga in the Tatarstan Republic. The $275 million factory is manufacturing three versions of its 1.6L Duratec gasoline engine for Russian-built Ford models, particularly the Fiesta, Focus and EcoSport.