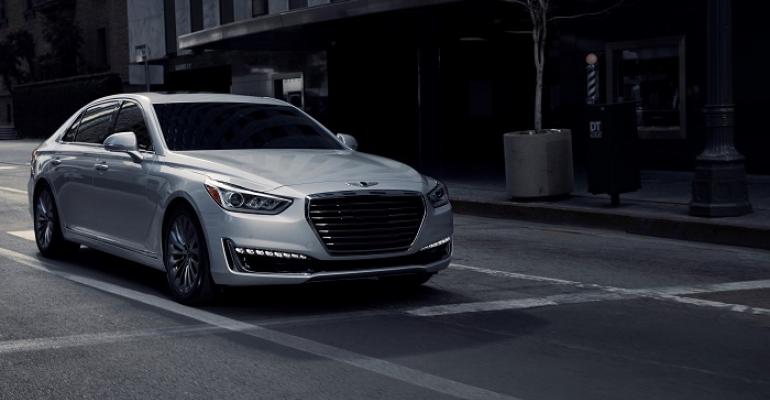 &ldquo;I think it&rsquo;ll work. The Korean (management is)&nbsp;very, very interested in this brand&hellip;to the point where they&rsquo;ve made significant investment in people, and they are making them in product.&rdquo;

IMPERIAL BEACH, CA – On the heels of announcing its Genesis luxury brand in December, Hyundai announced executives plucked from the upper echelons of the auto industry to staff it.

But as Hyundai’s South Korean management is known for being strong-willed, many in the industry are wondering if the new executives, including former Lamborghini brand and design boss Manfred Fitzgerald, will have the decision-making leverage they need to turn Genesis into a true competitor to luxury leaders BMW, Mercedes and Lexus.

Someone who has experience going toe-to-toe with said management hopes the new hires will have free rein.

“What I think is most telling is we’ve gone outside (the company), and given people completely outside of Hyundai (decision-making power),” Dave Zuchowski, CEO-Hyundai Motor America, tells WardsAuto here in an interview. “Obviously it’ll create problems if they’re not given the autonomy they need, because they’re very strong-willed on their own.”

Zuchowski got to know Fitzgerald, the new Genesis brand leader, after the recent North American International Auto Show in Detroit, where the Genesis staff was introduced in conjunction with the debut of the G90 luxury sedan.

"I talked to him (and said), 'Stick by your guns (even though) you’re going to get resistance,’” he says.

HMA is in its own negotiations with Hyundai senior management to get a production version of its Santa Cruz compact pickup, a vehicle it has fostered since the January 2015 debut of the concept, on the market.

Besides Fitzgerald, who became the Genesis brand leader in January, Hyundai also has hired Luc Donckerwolke from Volkswagen’s Bentley to oversee the Prestige Design Div., which includes the Genesis models.

“I think you’ll see the effects of his influence fairly quickly on our products,” Zuchowski says of Biermann, who is trying to improve the ride and handling of current Hyundais while also being involved with suspension engineering of Genesis models.

Meanwhile, Zuchowski says Fitzgerald is a proponent of alternative propulsion systems for the Genesis brand.

Many of Genesis’ German luxury competitors are pursuing alternative powertrains, such as plug-in hybrids and fuel-cell vehicles, to keep their performance credentials while at the same time meeting more stringent U.S. and European fuel-economy and emissions standards.

Hyundai thus far has announced only V-6 and V-8 engines for Genesis, while noting all Genesis powertrains will be unique and not shared with Hyundai nameplates.

Under the Hyundai brand, a PHEV version of the Sonata midsize sedan is offered in the U.S., while the all-new Ioniq car due this year eventually will have hybrid, PHEV and all-electric derivatives.

Genesis won’t be taking every page out of the Germans’ powertrain playbook, though, with Zuchowski saying diesels, available in most Audis, BMWs and Mercedes-Benzes, are not in the plans.

However, Hyundai is hopeful a diesel engine could appear in the Santa Cruz should it get green-lighted for production.

Hyundai is planning six models for the new Genesis brand, with the first, the Hyundai Equus replacement G90, going on sale this summer in the U.S. A refreshed Hyundai Genesis sedan, now known as the Genesis G80, also is due this summer.

Next year a BMW 3-Series-fighter midsize sedan is expected, while Genesis also plans CUVs to rival the BMW X3 and X5.

Lastly, a sporty 2-door, expected to replace the current Hyundai Genesis coupe, is on the drawing board.