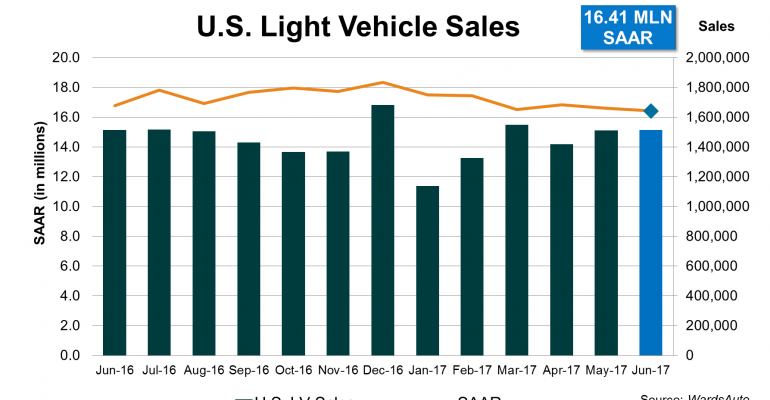 Even though sales were expected to slide again, June’s disappointing results put even more pressure on manufacturers to find ways to relieve the heavy inventory overhead they’ve been carrying throughout this year.

That’s especially true because underlying demand is expected to continue declining the rest of this year and in 2018. Thus, a temporary upward spike in sales volume – either in August-September or at the end of the year – is expected, and it is why the forecast remains higher than the first-half trend.

June’s seasonally adjusted annual rate of 16.4 million units was the lowest since the same total in October 2014, and well below year-ago’s 16.8 million. It also marked the sixth straight year-over-year decline.

Estimated splits in June for both retail and fleet were down from same-month 2016, and year-to-date volume for both also fell from last year.

Although incentives rose faster year-over-year, average transaction prices inched up; continuing a long-standing trend, according to initial estimates by ALG.

Despite big production cuts expected in the latter half of 2017, the industry will need relief on the retail side if it is to get bloated dealer stocks in line with demand this year.

A temporary reverse in ATPs through a combination of consumer and dealer incentives will be needed to spur retail demand enough to relieve the inventory burden. A temporary increase in fleet volume also is possible and would help trim inventories as well.

WardsAuto estimated that inventory ended May 600,000 units above the optimum level for current demand. Although combined estimates for June North American production and import shipments to the U.S. market were down from year-ago, it did little to alleviate the inventory overload, meaning production cuts over the remainder of this year would have to be huge to balance inventory with demand without a fire-sale of some sort.

Trucks, up 3.9%, continued a string of gains, thanks to continued increases in CUVs, SUVs, and pickups. The Small and Large Van segments declined in June from year-ago, and year-to-date totals for both also are below year-ago levels.

Of the eight automakers that increased market share in June over year-ago – including seven that posted higher volume – most did so either through incentive spending and fleet deliveries, or due to a high mix of fresh products.