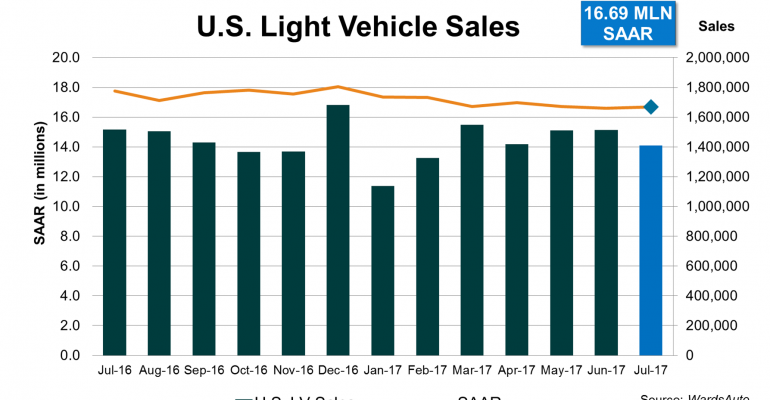 How market leader GM deals with its inventory surplus will determine the strength of a summer sell-down.

U.S. light-vehicle sales continued a year-long downturn in July, and even failed to meet expectations.

Most trends that have been true throughout the year continued, including a double-digit drop in car deliveries, which partially were offset by increases in CUVs and luxury trucks.

Based on daily selling rates, sales declined from the same year-ago month for the seventh consecutive period.

July’s volume equated to a seasonally adjusted annual rate of 16.7 million units, slightly above the prior month’s 16.6 million, but well below same-month 2016’s 17.8 million and the January-July year-to-date total of 16.9 million. (Note the Bureau of Economic Analysis revised its seasonal factors back to January 2014. Thus, some SAAR totals since then have changed.)

For the second straight month, fleet volume fared better in a year-over-year comparison than did retail, although both declined from July 2016.

According to initial July estimates from ALG, incentives continued to rise faster than average transaction prices, but not fast enough to induce enough demand to cut the surplus inventory burdening some automakers, especially General Motors.

Even with North American production estimated to have ended July 5% below like-2016 and import shipments also falling, inventory likely stood at about 4 million units on July 31, or 15% higher than necessary to meet current demand.

Stubbornly high inventory at the end of July leaves the specter of an end-of-summer incentive boom, but also means bigger production cuts are looming.

Whether there is a big round of discounting this summer or later in the year largely is contingent on how market leader GM deals with its inventory surplus.

Other automakers with inventory surpluses already are making moves to bring them down.

In particular, Toyota, the No.3 automaker in the U.S., which was a significant part of the inventory surplus, started paring stocks in June when its sales increased for the first time this year, followed by a 7.8% increase in July – its biggest since November 2015.

Thus, if sales are to get temporarily goosed through higher incentives, GM will be the determinant. But either way, look for continued production slowdowns at GM and some others, particularly in cars.

Car demand continued to slide in July, with sales falling 11.8% from year-ago, the 22nd straight decline. Furthermore, except for the dying Large Car segment, which is keeping afloat with 1% of the market, all segment groups in July posted drops in both DSR and market share.

Conversely, light trucks recorded their 52nd consecutive year-over-year increase, with July’s results up 1.9% from same-month 2016. Trucks also accounted for 64.1% of the market, compared with July 2016’s 61.1%. Sectors keeping the market afloat in July, and in the past few months, while most others were in decline or showing first signs of weakness, included midsize CUVs and SUVs, luxury CUVs and pickups.

The rest, which all posted declines in both volume and market share, included BMW, Daimler, FCA US, Ford, Hyundai, Tesla and Volvo. Hyundai’s 25.0% downturn was its worst since June 2009.