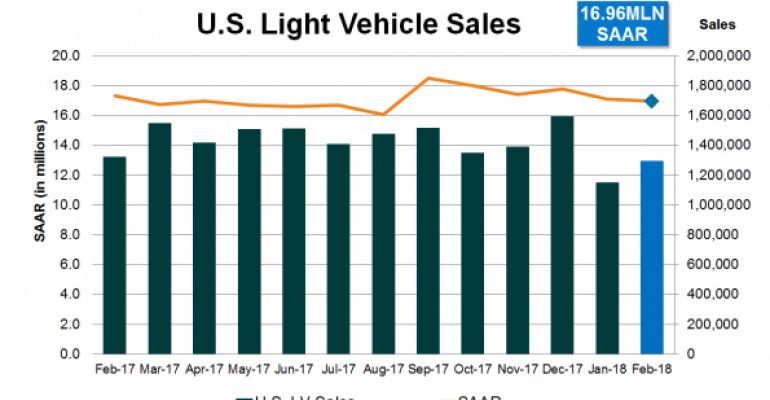 Without a rebound in incentive spending, and some continued strength in fleet deliveries, March&rsquo;s SAAR could fall below 17 million units.

Incentives and fleet deliveries had notable affects to the results.

Initial February estimates for incentives from ALG indicated an increase over the same year-ago period. However, February incentives, which typically rise from January, fell from the prior month. In part, that could explain the year-over-year decline in the estimated retail portion of February’s total.

Furthermore, the comparative lack of fresh product in the market right now makes retail demand even more sensitive to a pullback in incentives.

Conversely, fleet volume which posted a decline in 2017 from 2016, has started the year relatively strong with two straight year-over-year increases. If fleet volume had matched the year-ago total, February’s SAAR would have totaled 16.8 million.

The bottom line is that without a rebound in incentive spending, and some continued strength in fleet deliveries, March’s SAAR could easily fall below 17 million units.

One sector that might exemplify hyper-sensitivity to incentives is large trucks.

Large trucks declined year-over-year for a second straight month for the first time since January-February 2014.

Gasoline prices in February, according to the U.S. Energy Information Administration, hit a 30-month high, which ostensibly could be a cause for the downturn. However, if the results of the past two months indicate longer-term weakness for big trucks, it more likely is due to a lot of fullsize pickups, vans and SUVs getting long-in-the-tooth in their current product lifecycles.

If anything, the impact from higher fuel prices probably is keeping some consumers out of the market in general.

Bucking the trend in cars was the Luxury segment group. Luxury Car deliveries increased 2.3% in February, the second straight month, and third of the past four, to show a rise. Most of the gains were centered in sedans and coupes priced roughly in the $45,000 to $65,000 range.