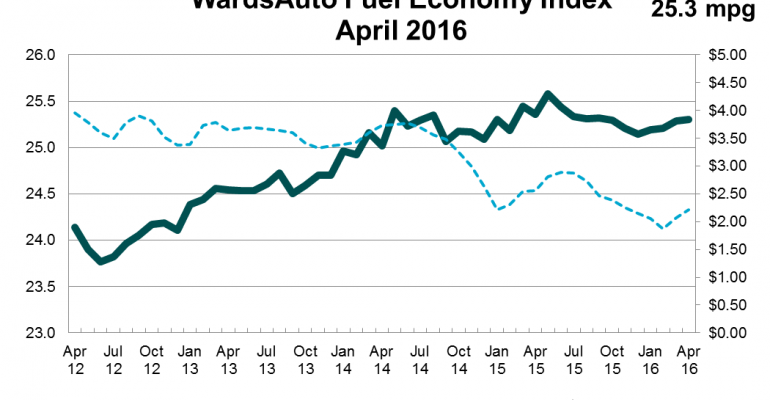 The national average price per gallon of gasoline in April was $2.216, 7.0% higher than in March and 13.3% below same-month 2015. The price has been below $3 for 18 consecutive months, influencing new-vehicle shoppers to choose relatively less-efficient models.

Market share of hybrid models came in below prior-year and continued a 6-month streak below 2%. Diesels and electrics also declined from April 2015. New products helped plug-in hybrids surpass year-ago, up slightly from 0.26% to 0.35% share.

Light trucks accounted for 58.8% index-tracked vehicles, the highest share ever for April and the third-highest for any month, as all segments showed growth from last year.

For the first four months of 2016, the index average was 25.3 mpg (9.3 L/100 km), 0.3% below the same period in 2015. Although automakers continue to improve fuel economy in a wide variety of vehicles, declining consumer interest in small and alternatively powered vehicles likely will result in the first annual decline in the history of the index as 2016 closes.