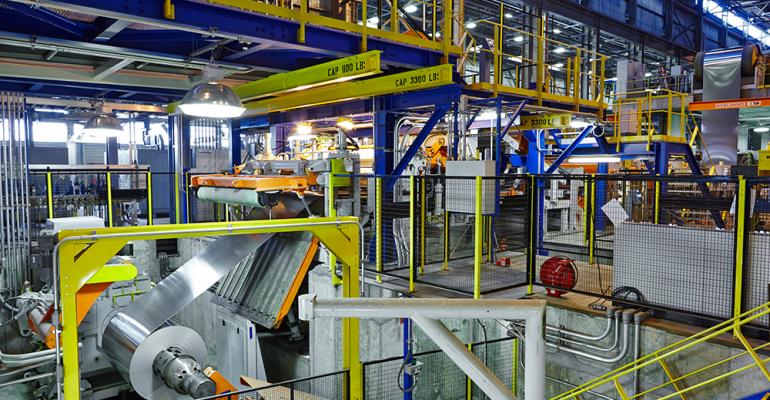 Experts agree aluminum usage is on the rise in the automotive industry, but will face competition from advanced steels and alternative powertrains as automakers seek to increase fuel economy.

When Ford announced at the 2014 NAIAS that its next-generation ’15 F-150 pickup would have a body almost entirely composed of aluminum, the entire auto industry took notice.

The news was significant on a number of fronts. While automakers, particularly luxury marques, have been using aluminum for years, it’s never been attempted to such a great degree on a high-volume mainstream product such as the F-150. Additionally, it gave the impression Ford somehow had gained an advantage by being first to the market.

Ford spokesman Mike Levine says it’s not about being first, but about offering customers the most advanced product on the market.

“We used high-strength, military-grade aluminum alloy throughout the body, which improves dent and ding resistance while saving as much as 700 lbs. (317 kg), giving our customers improved towing, improved payload and better fuel efficiency,” he tells WardsAuto.

“This is about giving customers a tougher, more capable F-150 independent of the materials,” Levine adds.

The move carries both risks and rewards, says David Cole, chairman-AutoHarvest and chairman emeritus for the Center for Automotive Research in Ann Arbor, MI.

“It’s a big roll of the dice,” he says. “Whether it’s an advantage or not is yet to be determined.”

Because aluminum is more expensive than steel, the new F-150 likely will cost more than the current model, although Ford has yet to release pricing. Additionally, most of the F-150 lineup will come with EcoBoost engines featuring direct injection and turbocharging, technologies that further add to the price tag.

Fuel-economy figures for the new truck also have yet to be released, but Cole says efficiency and cost will be the primary determinants as to whether Ford’s move to be first with aluminum pays dividends.

“The tradeoff from the consumer perspective is, ‘What is it going to save me vs. what’s it going to cost me?’” he says. “That’s an important part of the discussion.”

Cole says there are several reasons not to be first in such a major materials shift.

One is the possibility of a change in fuel-economy regulations. There is a 2017 review scheduled for the 2025 fuel-economy standards that call for automotive fleets to achieve 54.5 mpg (5.1 L/100 km).

The timing of the review was chosen intentionally because it comes after President Obama has left office. Should the next administration ease requirements, the immediate push to adopt aluminum could be a costly mistake, Cole says.

Additionally, some automakers feel alternative powertrains, such as diesel engines or electrification, could negate the need for significant lightweighting.

“There are programs going on for every (technology), but it is not clear what the (winner) will be,” Cole says. “It may be that there is not just one solution. Other (automakers) may think having a steel body with a modified engine or diesel is equivalent to a twin-turbo, aluminum-bodied vehicle.”

Some recent media reports suggest being first allowed Ford to corner the market on aluminum, but that is not the case, says Richard Schultz, a project consultant at Ducker Worldwide.

In fact, General Motors, the world’s biggest automaker, already is the top automotive aluminum consumer, using the material for a variety of parts, including doors and hoods.

Schultz says the material is plentiful, but it’s important for automakers to inform aluminum producers years in advance of a program of the need for heat-treated sheet aluminum.

“Since 70% of that has to be heat-treated you have to give aluminum companies warning in advance to gear up to add heat-treating lines,” he says. “Automakers aren’t worried about the supply of raw aluminum, but about sheet.”

Schultz dismisses the notion the aluminum F-150 will be high-priced, noting use of the material offsets costs in other areas.

“It’s more expensive, but you have to add in the value of scrap, which is very valuable,” he says. “And when you save so much weight you can make suspensions and other parts smaller and thinner.”

Schultz says Ford caught the rest of the industry off-guard when it took the wraps off the next-gen F-150. What surprised competitors, he says, was not that Ford decided to take the step, but that it did so so early.

“They wanted to get the jump on everyone and put out a better truck,” he says. “But GM will eventually catch up, and so will Chrysler and others.”

One thing experts agree on is that steel still will be heavily used by the auto industry in the foreseeable future.

Craig Parsons, Nanosteel president-automotive, says new steels, including high-strength alloys like his firm’s namesake product, are getting lighter and stronger.

Like Cole, Parsons says there is no one final solution to lightweighting, and some automakers will choose advanced steels over aluminum.

“If you look at steels out there years ago, you couldn’t lightweight; they weren’t strong enough and you couldn’t (form) the shapes needed,” he says. “Aluminum has come a long way, as well, but I think technologies like nanosteel are going to give automakers alternatives to aluminum so they can do lightweighting with better geometries and thinner materials.”

Parsons argues the aluminum industry simply does not have the capacity to significantly challenge steel in the automotive industry. As such, a combination of both aluminum and steel likely will be the solution for most automakers.

He points to GM’s new pickups, the Chevrolet Silverado and GMC Sierra, as examples of how advanced steels can cut weight. The new Silverado, he says, is 350 lbs. (159 kg) lighter than the current F-150 because of higher use of advanced steel. Although Ford is saying its upcoming truck will be 700 lbs. (318 kg) lighter than the current one, that means it will weigh only 350 lbs. less than today’s Silverado.

“Each generation of truck is lighter,” he says. “It’s always the most recent introduction that is the lightest in its class.”

Randall Scheps, global automotive marketing director for Alcoa, believes Ford has an advantage, because it will take other automakers time to catch up in developing their own aluminum-intensive trucks.

In the meantime, Ford could enjoy the benefits of having the most fuel-efficient truck on the market.

Some critics have knocked aluminum as being unsafe and not rugged enough for use on a product such as the F-150, which is used widely in commercial applications.

Scheps says the criticisms are unwarranted.

“The safety argument is an old take,” he says. “The best indicator of safety is the size of the vehicle and crush space, and the best way to maintain space and fuel economy is aluminum.”

Ultimately, switching to an aluminum-based body in its highest-volume product is one the most significant automotive developments in decades, Cole says.

“It’s a really big deal,” he says. “It potentially redefines the body of a vehicle.”