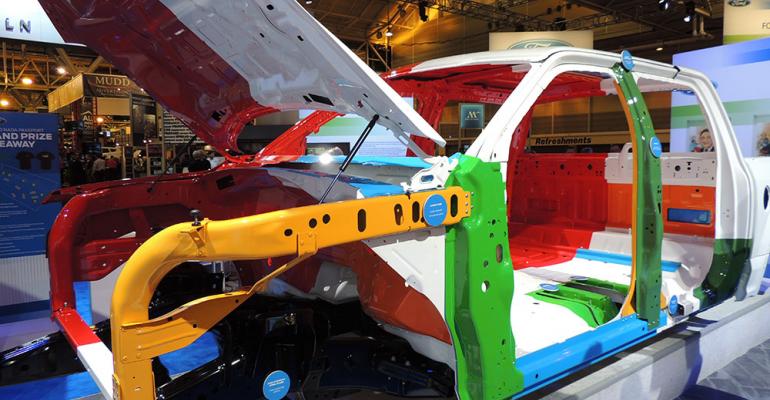 Ford says the new F-150&rsquo;s modular front structure can be replaced in 6-7 hours less than with the existing model.

NEW ORLEANS – The upcoming all-new F-Series pickup will be easier and less costly to repair, thanks to the modular design of its aluminum-intensive body-in-white, Ford tells dealers here.

If retailers were worried about the prospect of having to repair the ’15 models once they hit the market later this year, their fears appeared to be eased after meeting with company officials at the 2014 NADA Convention and Exposition here.

Dealers with body shops, as well as independent repair shops, will have to invest up to $30,000-$50,000 in new tooling and certification training in order to be able to repair the new models, but those questioned here are taking the outlay in stride.

“It’s not much considering what (the F-Series) means to the company,” says Tod Citron, a Lafayette, LA, dealer. “(The new model) is only going to improve our market.”

Ford officials tell dealers they expect insurance costs for the new vehicle to be competitive with other fullsize pickups in the market, despite the heavy use of aluminum. And they express confidence the collision-repair industry will be ready to handle the new trucks once they begin arriving at showrooms.

Citron says the cost of insuring the vehicle was a concern for dealers heading into Sunday’s franchise meeting here, because a higher premium could scare away some buyers.

But fears were eased once Ford executives detailed the truck’s modular construction, which the automaker says makes collision damage easier and less costly to repair.

Farley points to the new F-150’s modular front structure that supports the fenders and is vulnerable in offset crashes that account for about 15% of collisions. That component can be replaced in 6-7 hours less than with the existing model, representing a significant cost savings.

The truck’s A-, B-, C-pillars and roof also are more repair-friendly, Farley says.

At the center of Ford’s exhibit here is the new F-150’s body-in-white with parts painted different colors to highlight its modularity.

The new F-Series is scheduled to go into production at the automaker’s Dearborn, MI, truck plant in the fourth quarter and go on sale shortly after.