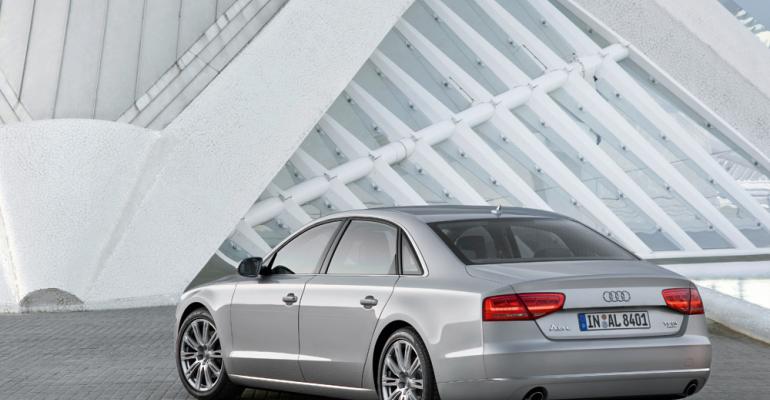 NEW YORK – It's a great time to be in the aluminum business, says Randall Scheps, Alcoa's marketing director of automotive sheet, whose phone keeps ringing with calls from auto makers planning a major expansion of aluminum use for the entire body-in-white.

Audi pioneered this application 25 years ago and has been an aggressive consumer of aluminum, principally in the limited-production A8 flagship model. Now the German luxury auto maker is expanding use of the metal in its high-volume A6 and TT sports car.

“In the next five years, you'll see more high-volume mass-market cars with all-aluminum bodies,” Scheps tells WardsAuto at the second annual Aluminum Summit here. This wave will be led in North America, but he declines to name the vehicles that will pace the move.

However, Ford announced in January that its next F-series fullsize pickups, due in 2014, will have aluminum body panels as the auto maker races to comply with increasingly stringent fuel-economy standards.

Scheps, who also serves as chairman of the Aluminum Association's Transportation Group, says aluminum body-in-white cars up to now have been niche vehicles with sales of about 20,000 annually. But in five years, they will include models that deliver 200,000 units a year.

“We've got a projection that the North American auto industry will become the largest consumer of aluminum sheet in the next five years, surpassing Europe,” he says, forecasting vehicles with a full body-in-white may contain up to 1,000 lbs. (454 kg) of aluminum, including wheels, engines and transmission cases.

Cars built in Europe will contain a similar percentage of the metal, but because they generally are smaller in size will have less overall aluminum content, Scheps says. Asian auto makers also will join the movement. “I think Honda and Nissan are the leaders in Japan. Toyota will be a little slower to adopt.”

He says greater use of aluminum in cars built in China will come later and in two waves: The first will be led by foreign joint ventures in the country and the second, which may be a decade away, will involve local OEMs.

All auto makers eventually will shift to greater use of aluminum because future fuel-economy and emissions standards compel the use of super-efficient, lighter-weight powertrains without sacrificing interior space and vehicle functions.

Scheps says the aluminum industry is ramping up capacity to meet the increasing demand. Alcoa, for example, recently announced plans to invest $300 million to increase production of automotive aluminum at its Davenport, IA, plant.

There are 150 workers employed in creating the extra capacity, and a total 2,300 workers will have jobs there once the facility is ready next year.

Alcoa also is building the world's largest and lowest-cost fully integrated aluminum complex in Saudi Arabia. A rolling mill is included for automotive body sheet, with annual capacity of 100,000 tons (90,718 t). The project comes on line in 2014.

There are some challenges facing the auto and aluminum industries as the switch to the metal accelerates. For instance, more technicians will need to be trained to handle aluminum repairs. But Scheps is confident this can be achieved. “It's something the auto industry knows how to do.”

The Alcoa executive notes that some high-strength steels are difficult, if not impossible to repair. The industry already has updated a repair manual for aluminum in Europe. “We support those efforts in any way we can,” Scheps says.

Additional demand for the metal is expected from the growing electric-vehicle industry, where lightweight is a must, not a want. “EV batteries are so expensive that for every dollar you spend for aluminum, you save $3 in batteries,” he says.

Scheps estimates steel costs U.S. auto makers $0.30 to $0.50 per pound, compared with $2/lb. for aluminum, while composites can cost up to $10/lb. But he believes aluminum still has advantages over high-strength steel in the future. The principal reason is not much more can be done with high-strength steels to reduce vehicle weight.

Scheps does not see the current higher cost of aluminum as a deterrent to greater use of the metal, and says car buyers are ready to pay for its use in order to pay less at the gas pump. Consumers are going to have to pay for a lot of things in getting to 54.5 mpg (4.3 L/100 km),” he says.