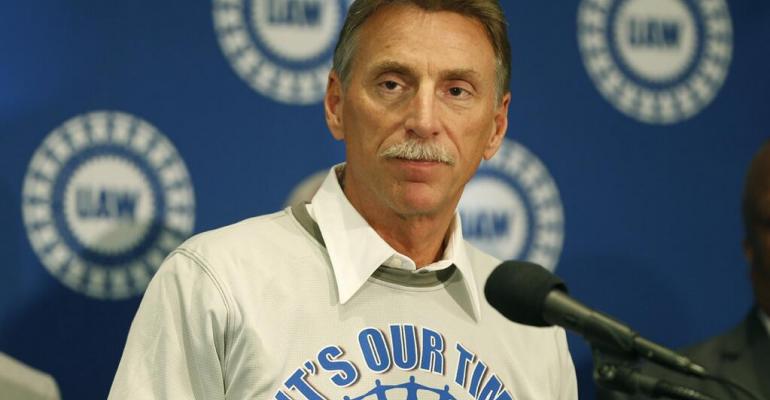 UAW President Dennis Williams said in a letter to union members, &ldquo;We have pushed for, and implemented, needed reforms at the (UAW-FCA National Training Center) in an effort to prevent future misconduct.&rdquo;

UAW leaders say every union officer or staff member implicated in the scandal stemming from the theft of funds from a joint training center run by the union and FCA US no longer is with the UAW.

“Based on our own internal investigation, we believe anyone who engaged in intentional misconduct is no longer employed by the UAW,” union President Dennis Williams says through a spokesman in response to a question from WardsAuto.

Earlier this month, Williams said in a letter to union members, “We have pushed for, and implemented, needed reforms at the (UAW-FCA National Training Center) in an effort to prevent future misconduct.”

A federal grand jury in Detroit has indicted former FCA Vice President Alphons Iacobelli on charges of siphoning off more than $1 million in NTC funds for his personal use at the same time he was using another $1.2 million in training-fund money to influence key UAW officials over a 6-year period from 2009 to 2015.

A second former FCA employee, Jerome Durden, who had approval authority over NTC expenditures, has pleaded guilty to charges he used $4,300 in NTC funds to pay off debts on his personal credit cards.

In addition, the federal indictment also charges former UAW official General Holiefield and wife, Monica Morgan, used more than $465,000 in NTC funds to pay off the mortgage on a home in suburban Detroit and several thousand dollars more for clothing, gifts and travel. Holiefield was head of the union’s Chrysler Dept. during a critical period beginning in 2006. He retired in 2014 and died of cancer less than a year later.

One of Holiefield’s chief UAW lieutenants, Virdell King, also was indicted on charges of taking money from the NTC. King retired in 2015. At least two other now-retired UAW staffers once assigned to the union’s Chrysler Dept. have come under suspicion during the course of the federal investigation but have not been charged with any crime.

Iacobelli and Morgan are scheduled for trial Sept. 25 in U.S. District Court in Ann Arbor, according to court records.

The indictment of King, which was separate from the original indictment of Iacobelli, Morgan and Durden, also included embarrassing details about a gift made to Norwood Jewell, the current head of the union’s Chrysler Dept.

Jewell, according to federal investigators, received a shotgun valued at $2,180 as a birthday gift in 2015. Jewell, however, did not know the gun had been purchased with funds from the training center and reimbursed the money when he discovered the expenditure of company and union funds.

Brian Rothenberg, the UAW’s communications director, said Jewell had acted quickly and decisively once he learned of the circumstances of the gun’s purchase and reimbursed the fund out of his own pocket.

Jewell had a key role in the contentious talks with FCA in 2015 when union members overwhelmingly rejected the first contract proposal because it did not go far enough in closing up the 2-tier pay system included in UAW contracts with GM, Ford and FCA.

“This conduct (by Iacobelli and the other defendants) had nothing whatsoever to do with the collective bargaining process,” FCA CEO Sergio Marchionne in a letter to employees last month.

News of the NTC scandal came at inopportune time for the union, which has been facing hostility from a Republican-led administration in Washington and unsuccessfully organized workers at a Nissan plant in Canton, MS.

Williams insists the union is doing everything it can to ensure the misbehavior alleged in the indictments doesn’t occur again.

“Since being made aware of these allegations (in 2016), the UAW has cooperated fully with the (Department of Justice) and continues to share information with the government. The UAW also hired independent outside counsel to conduct an internal investigation into these allegations,” Williams said in July.

Rothenberg says the union has taken a number of “active measures to prevent this kind of misconduct now and in the future, and have worked with the NTC and Fiat Chrysler to implement a range of measures aimed at enhancing transparency and internal controls at the NTC.”

These steps include a mandatory, annual independent audit of the NTC’s finances, hiring a full-time in-house controller to oversee disbursements, requiring annual budgets for each program or department and implementing a budget review process.

Budgets now are approved by the NTC board of directors. The union also requires that two officers and the controller review and approve credit-card statements for payment, as well as approve new vendors hired to provide services to the NTC.

In addition, donations from the NTC to any charity run or controlled by a UAW official are explicitly prohibited, and a written credit-card policy, including what is or is not permissible, has been created.