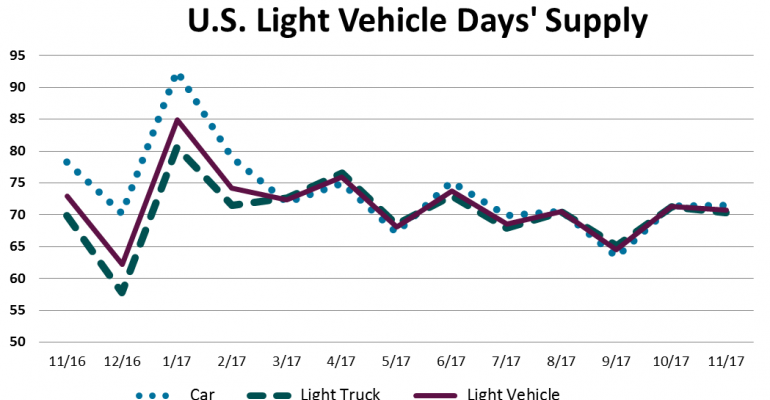 U.S. demand will have to stay close to the 17 million-unit SAAR level early next year for inventory not to again become a problem of excess.

Trucks could push 70% penetration of U.S. light-vehicle sales in December, especially because the month is a seasonally strong one for large pickups and SUVs.

Also helping will be continued record demand for CUVs. Because CUVs continue to pull volume from cars, the segment group should post its third straight month of record market share, easily topping November’s 37.1%, possibly ranging somewhere between 39% and 40%.

Although there still might be a higher mix than automakers would like of ’17 models on dealer lots, which could encourage even heftier price discounting compared with November, car stocks finally are getting closely in line with demand. Depending on how much pressure automakers still feel to cull dealer lots of unwanted cars, lower stocks could actually work to limit total December deliveries.

U.S. car inventory ended November at 1.32 million units, lowest for the month since 2011, and a whopping 17.2% below same-month 2016. Days’ supply totaled 74, indicating there still are some pockets of excess because 70 is a more optimum level for cars in November.

Truck stocks totaled 2.61 million units, a record for the month and 8.4% above year-ago. Days’ supply of 73 is a tad high based on what’s historically healthy for the month. But considering the sector still is growing, the total overall probably is well balanced with demand. As with cars, the mix of ’17 models might still be slightly high.

A potential headwind to reaching a December SAAR as high as 17.8 million units could be that there are fewer selling days after the Christmas holiday compared with the past two years.

Some automakers reported that volume at the end of November was below expectations, meaning the month ended with some weakness. If that weakness continues into December, it will be harder to rebound with a post-holiday burst.

Based on the initial December sales projection, inventory will end the year between 3.65 million and 3.7 million units, well below same-period 2016’s 3.87 million.

For inventory not to become a problem of excess early next year, demand will have to stay close to the 17 million-unit SAAR level, at least in January and February. Otherwise, North American production and import shipments will have to be tamped down during the spring and summer if automakers want to avoid heading into another new model year with too much old inventory.

That’s especially true because demand is expected to decline next year. WardsAuto is forecasting 16.4 million units in 2018, lower than the consensus views of 16.7 million to 16.8 million. With significant pent-up demand nonexistent, how far sales ultimately decline likely depends on how deep automakers are willing to dive into incentives.