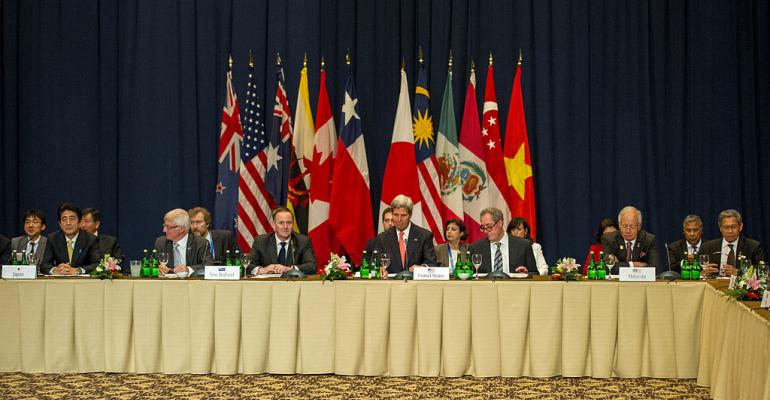 The agreement includes tariff-elimination schedules and rules of origin for the automotive sector. It also details what proportion of an automobile or a part must be made in a partnership member country for duty reductions to apply.

Manufacturers also will be able to pinpoint their vulnerability to new competition.

The agreement’s text has been published by the 12 signatory countries: the U.S., Japan, Canada, Australia, New Zealand, Mexico, Vietnam, Malaysia, Chile, Brunei, Singapore and Peru. It also has been released online by the individual governments; the U.S. version can be accessed here. (https://medium.com/the-trans-pacific-partnership).

The ultimate aim of the TPP is to make most of these trades duty-free. Once ratified by all parties, the pact could take effect as early as next year.

The agreement includes tariff-elimination schedules and detailed rules of origin for the automotive sector. The schedules list the current level of duties and how much time a government will take to scrap them for intra-TPP zone trades. It also details what proportion of an automobile or a part must be made in a TPP country for these duty reductions to apply.

As previously announced, this threshold is about 45% for autos and parts, although it varies by both product and the calculation method used to decide how much value within an auto or part has been sourced within the TPP zone.

The key area for automakers is the 8702 to 8705 tariff classifications which cover cars, vans, trucks, buses and special-purpose vehicles such as fire trucks and cranes. Here, 45% of value must come from TPP countries for the duty reductions to apply to TPP trades, if the origin calculation is made by the so-called net-cost method. It is 55% if the build-down method is used.

Net cost is the total cost of making an auto minus sales promotion, marketing and aftersales service costs, royalties, shipping and packing costs and certain interest costs. Build-down involves assessing the value of materials used to make a vehicle that have been imported from outside the TPP zone and dividing this by the value of the finished auto.

The origin rules for parts are even more complex, depending on the kinds of parts covered in tariff classifications 8706 to 8708. For parts, the TPP deal allows an additional kind of calculation method to be used: the build-up method, which involves assessing the value of TPP zone-sourced materials used to make a part divided by the value of the finished part.

For instance, for chassis fitted with engines, the TPP requires 45% to be made in the zone for duty reductions to apply using build-up and 55% by net cost or build down. For bodies, including cabs, it is 35% for build-up and net cost and 45% for build-down.

However, additional rules for deciding if a part is TPP-made makes it easier for an importing country to apply pre-TPP duties when exporting TPP manufacturers use parts from outside the zone, and for TPP exporting countries to insist their autos are TPP-made when they source parts within the zone.

These rules allow importers and exporters to insist that parts such as bodies, safety glass, bumpers and axles be deemed to have come from a TPP country (accompanied by reduced duties) if one or more of a range of important manufacturing processes is used to make them in a TPP country. That includes complex assembly, laminating, extrusion and forging methods.

Also, this special parts deal allows importers to limit the contribution a listed range of parts makes to the overall assessment of whether a vehicle is TPP-made; for instance, transmissions and brakes are capped at 10% value within these calculations and at 5% for airbags. This forces manufacturers to source more parts within the zone for an auto to be deemed made-in-TPP and get the duty reductions.

Duty reductions for intra-TPP trades vary from country to country. A good example is in the U.S. schedule (http://www.mfat.govt.nz/downloads/trade-agreement/transpacific/TPP-text/2-D.%20US%20Tariff%20Elimination%20Schedule.pdf).

America has promised to phase out its 25% duties on truck imports from the time the agreement enters into force for manufacturers in Australia, Chile, Peru and Singapore, along with Canada and Mexico (already linked to the U.S. through NAFTA). It will phase out these duties over 10 years for imports from Malaysia, Vietnam, New Zealand and Brunei.

But for Japan there is thin gruel: The 25% duty on truck imports remains in effect for 30 years. Liberalization for Japanese cars is slow as well – a 25-year phase-out, albeit for lower existing duties of 2.5%. Phase-out schedules for U.S. car tariffs for the other TPP countries mirror those applying to American truck duties.

Because Japanese auto-import duties already are low or nonexistent, the rule-of-origin changes will have the biggest impact, allowing more foreign TPP autos to benefit from this access.

The TPP signatories also have disclosed texts on an agreement on customs facilitation and trade facilitation measures. Also released are investment rules approved under the TPP that include policy and legal principles to be followed regarding land appropriation, often a key issue for mining.

Details on the regulation of professional services, labor and the environment also have been published.