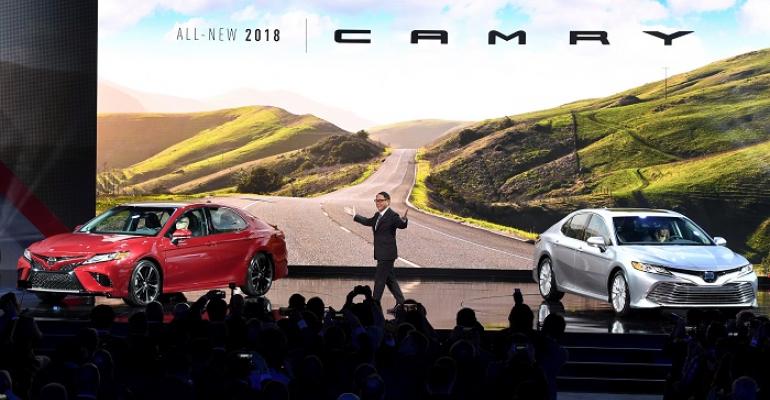 The increasing affinity for CUVs instead of cars by American buyers, combined with a flattening U.S. auto market, could prevent Camry from growing in 2017.

DETROIT – Despite the eighth-generation Camry launching in late summer, and predictably good deals to be had on the outgoing model, Toyota doesn’t foresee a sales increase for the midsize sedan in 2017.

“We did 388,000 last year. Give or take, we’re looking at a push,” Bob Carter, senior vice president-automotive operations for Toyota Motor Sales U.S.A., tells WardsAuto in an interview at the 2017 North American International Auto Show.

WardsAuto’s first-quarter production schedule shows Toyota is easing builds of car models. In Q1, Toyota is planning to produce 2.2% fewer cars in the U.S. than Q1 2016. The Camry is assembled at Toyota’s Georgetown, KY, plant.

“We’re going to build to the market,” Carter says of Camry output in 2017, hinting at Americans’ waning desire for midsize sedans.

Camry inventory grew to a 63 days’ supply in late December from 43 in the same period year-ago, although that still was below the 70 days’ supply average for cars.

While he doesn’t see it pushing Toyota’s sales up, Carter does think the new Camry could help stabilize sales of midsize cars.

“I think there’s a chance that will happen,” he says. “We’ve seen that before, where segments typically respond to new product. The midsize segment – there really hasn’t been much new product there in the last couple years.”

A next-generation Honda Accord is expected later this year, although if it is a late-year launch its sales impact may not be felt until 2018.

In 2018, Nissan is due to launch a redesigned Altima.

The Camry, Accord and Altima are the top three best-selling midsize sedans in the U.S., although all lost volume in 2016, with the Accord down 2.9% and the Altima off 7.8%.

“I think we can start to see some stabilization (of the segment),” Carter continues. “Even if it stabilizes at its current level, it’s still…a huge segment.”

At best midsize sedans in 2017 “might show a little growth,” he says, but the desire for CUVs, specifically compact CUVs such as the Toyota RAV4, won’t wane anytime soon. “That segment right now is seeing insatiable demand,” Carter says.

This year Toyota has targeted 400,000 RAV4 sales in the U.S. If that happens, and Camry sales don’t grow, the compact CUV will overtake the midsize sedan, marking the first time in decades the Camry is not Toyota’s No.1-selling U.S. model in a calendar year.