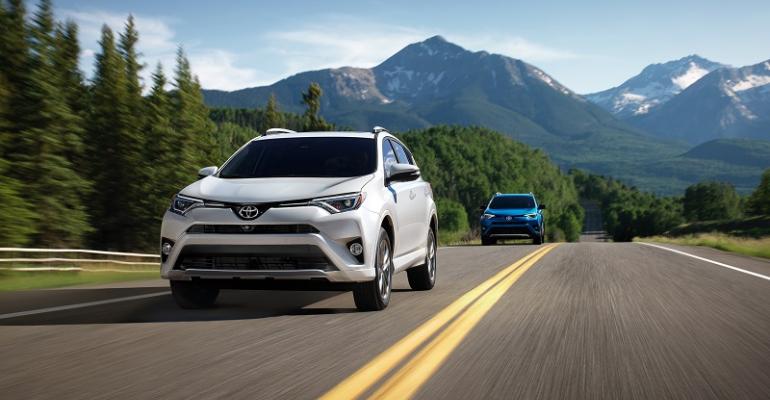 For the first time in 28 years the Camry wasn&rsquo;t Toyota&rsquo;s best-selling model, although it had a record December.

Both Toyota and Lexus brands fell last month on a DSR basis, with the former down 3.6% and the latter 10.6%.

Most Toyota-brand models lost momentum last month compared with year-ago, including the soon-to-be-replaced Avalon large sedan (-50.1%), the Corolla compact car and hatch (-34.5%) and the subcompact Yaris (-72.3%).

Sales of the Prius liftback/V wagon/Prime plug-in fell 18.0%, and the compact Prius C declined 39.7%, capping months of losses for the hybrids.

Uncharacteristically down in December was the Highlander midsize CUV, falling 14.1% on a DSR basis. However, Highlander sales for the year rose 12.7% to 215,775.

The Highlander couldn’t match the strength of the RAV4 CUV, however, which took over sales leadership in May from Toyota’s Camry, the brand's top-seller from 1989 to 2016, and never let go.

Speaking to the RAV4’s December dip, Jack Hollis, group vice president-Toyota Div. for Toyota Motor Sales U.S.A., tells media on a conference call that the automaker has been selling RAV4s as fast as it can build them.

“We are truly selling at a greater pace each month,” he says, noting inventory of the RAV4 was light heading into last month.

Taking the biggest plunge in December was the discontinued CT 200h hybrid hatchback, down 99.0% on a DSR basis. Of current models the LS, soon to be replaced with a new generation, fell 47.8%.

Toyota underperformed the Ford brand on annual volume, but usurped Chevrolet to become the second-best-selling new-car brand in the U.S. in 2017. In 2016, Chevy was second and Toyota third in total sales.

Lexus’ place in the luxury hierarchy is still to be determined. Mercedes-Benz is certain to remain on top given its 332,990 sales through November, but only a couple thousand units separated BMW and Lexus for second place in that period.

Given the industry softening in 2017, Hollis still is optimistic about new-vehicle sales in the year ahead. However, he sees the seasonally adjusted annual rate dipping into the upper 16-million-unit range, possibly hitting 17 million.

However, Honda’s December sales fell 3.4% on a DSR basis, it says, while Nissan says it lost 9.5% on a volume (non-adjusted) basis.

Despite an all-new model in the market, Accord sales fell 32.2% in December, Honda says, and were down 6.5% for the year, with 322,655 deliveries not enough to budge the Camry from the top-midsize-car slot.

Thanks to the Camry’s December rally, the Civic was the No.2 best-selling car in the U.S. in 2017, not the No.1 model as many had expected.

As for whether the light-vehicle industry's current two-third/one-third mix of light trucks and cars will ameliorate any time soon, Hollis says, “We believe it’s going to stabilize about right here,” mentioning the current strong performance of the Camry and forthcoming redesigns of the Avalon as well as the Corolla as buoying car sales.