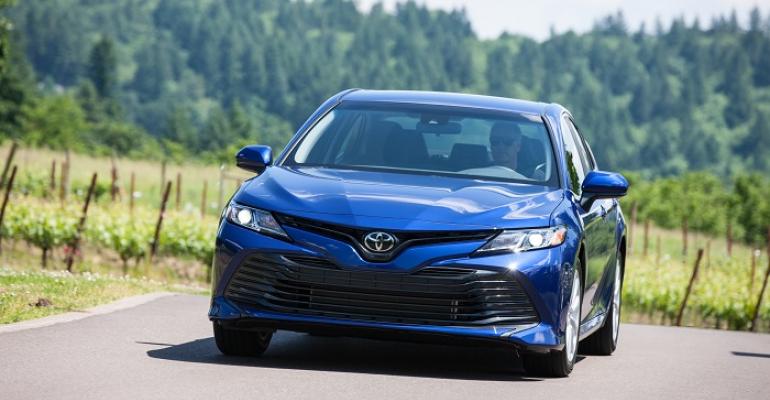 Younger buyers are embracing the Camry&rsquo;s sportier grades, but it won&rsquo;t be enough to put the midsize sedan back atop Toyota&rsquo;s sales chart, says a senior executive.

LOS ANGELES – Toyota projects strong U.S. sales in the month of November, driven by the new Camry and the automaker’s continued efforts to fill its dealers’ lots with trendy utility vehicles.

“Toyota business is a little bit more robust than Lexus (this month),” Bob Carter, executive vice president-sales, Toyota Motor North America, tells WardsAuto in an interview during the 2017 Los Angeles auto show. “Toyota will probably come in slightly ahead of where we had thought, driven largely off of Camry.”

He sees the industry coming in at a 17.2 million or 17.3 million-unit seasonally adjusted annual rate, although that is without data from the Thanksgiving weekend, typically a strong period for U.S. new-vehicle sales.

“And what’s really starting to pop is the 35-40(-age) bracket – it’s really responding to this car,” he says. “A 35-40-year-old buyer for a Camry is an incremental buyer to the brand. And I’m really pleased with that.”

Camry loyalists make up 60% of early buyers and 40% are coming from other brands, with Toyota conquesting Honda despite a next-gen Accord also being available. The Accord traditionally is the second-best-selling midsize sedan in the U.S. after the Camry.

With Camry ads ubiquitous, Carter believes a lack of Accord marketing (Honda doesn’t launch marketing until early next year) is contributing to Toyota’s ability to woo current Accord owners.

While the top Toyota sales executive says redesigns of the No.1- and No.2-selling midsize sedans in the U.S. could stop segment losses next year – and maybe even result in modest growth – the Camry won’t be Toyota’s top-seller again, at least anytime soon.

“It’s outflowing from all sedans. That compact SUV, that whole segment – depending on the model – is transacting from $25,000-$28,000,” Carter says, almost the same transaction-price range as midsize sedans.

WardsAuto’'s Middle Car group was down 16.2% through October, to 1.85 million units from 2.21 million in the same period last year. The segment’s decline is the greatest of any major vehicle group in the U.S. in 2017.

The Middle CUV group is the largest sector by volume, rising 7.9% through October to 2.90 million units.

Carter expects the RAV4 will surpass the 400,000-unit goal Toyota set for it  when 2017 sales are finalized, but he sees less growth next year, a sign the vehicle may be reaching its volume peak, or at least the limits of Toyota’s current production capacity at RAV4 plants in Ontario and Japan.

“There’s still some growth there, but it’s not the exponential growth we saw in the past,” he says.

Despite a year-old model in the market, the CR-V has seen lower growth January-through-October (5.1%) than the RAV4.

Carter sees demand for CUVs growing: “Is there more room for CUVs in the industry? Absolutely.”

A U.S. Toyota official told WardsAuto earlier this year he saw space in the market for another small CUV besides the low-volume C-HR, a front-wheel-drive vehicle in a segment with 70% all-wheel-drive sales, Carter says.

Besides the possibility of bringing the AWD C-HR from Europe to the U.S., and possibly its hybrid variant, Toyota is testing American appetites for CUVs with two concepts.

The FT-4X concept CUV, shown in New York earlier this year, and the FT-AC concept CUV, revealed here today, are geared toward outdoor enthusiasts and have quirky design elements such as removable parts and 2-tone paint jobs.