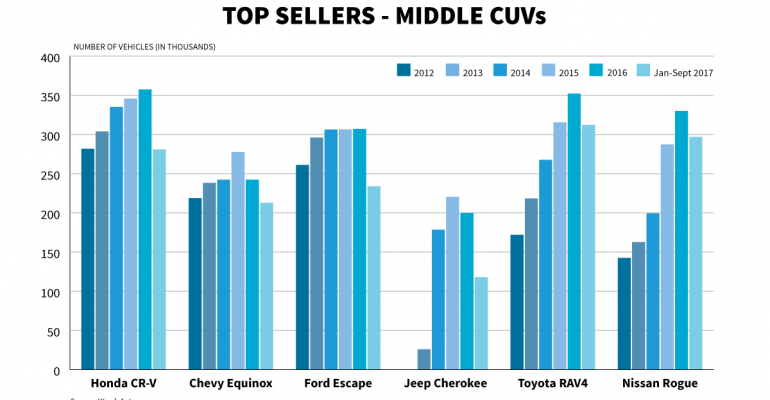 In calendar 2012, General Motors, Ford and Chrysler accounted for 11 of the top 15 best-selling light trucks in the U.S. Through 2017&rsquo;s first three quarters, the Detroit brands occupied nine of the top 15 slots.

Much as they did in the car sector, Japanese auto brands increasingly are taking a bigger piece of the pie in the light-truck group.

And as happened with midsize and compact sedans in the late 1990s, it is the Detroit Three that are losing ground, largely on the midsize-CUV front, WardsAuto data shows.

In calendar 2012, General Motors, Ford and Chrysler accounted for 11 of the top 15 best-selling light trucks in the U.S. and four were Japanese. Through 2017’s first three quarters, the Detroit Three occupied nine of the top 15 slots while the Japanese held six.

The Detroit Three remain firmly atop the list through September, with the fullsize-pickup triumvirate of the Ford F-Series, Chevy Silverado and Ram (with 612,312, 418,590 and 362,158 units sold, respectively) in their longtime spots of first, second and third place.

But the Japanese automakers’ growing dominance of the midsize CUV segment has altered the makeup of fourth through sixth place over the past five years.

Through September, the CR-V was down to sixth place and the RAV4 and Rogue were the No.4 and No.5 best-selling light trucks in the U.S.

One of the key reasons for the shift looks to be sharply higher North American output by the Japanese automakers – specifically Toyota and Nissan – of their midsize CUVs, supplementing Japanese builds of the same models.

Rogue sales more than doubled from 2012 to 2016, as Nissan expanded production as well as included the prior-generation Rogue, sold as the Rogue Select (now defunct), in the CUV’s lineup.

Through September, Rogue sales were up 22.9% from year-ago. Nissan this year introduced a smaller Rogue to the lineup, the Rogue Sport, for which it doesn’t break out sales figures.

Meanwhile, Equinox and Escape volumes have been relatively static the past five years.

However, that volume placed it eighth in the top-15 light-truck sales list. If the strike at the Equinox’s assembly plant in Ingersoll, ON, Canada, persists, it could drop the CUV even farther down the list at year-end.

Another factor in the changing makeup of the top-15 list has been the slowdown in Jeep deliveries in recent years.

The Grand Cherokee has bucked the trend, with sales rising from 2012. Through September, deliveries of the SUV were up 17.7%, placing it in the No.10 spot.

Look for the pressure on Detroit Three light trucks to continue, as the Asian brands add CUV models and ramp up production of existing nameplates.

Toyota this year announced yet another increase in Highlander midsize-CUV output at its Princeton, IN, plant, slated to commence in 2019.

Subaru also has been producing more CUVs to meet growing U.S. demand while expressing a desire to do so cautiously so as not to bulge inventories.