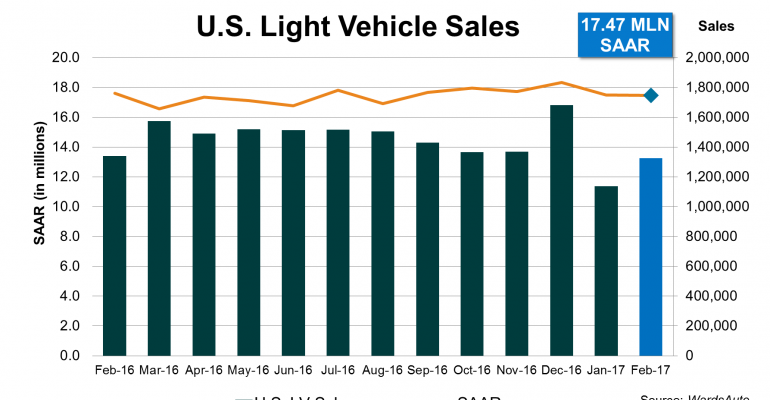 Year-to-date 2017 light-vehicle sales are 1.4% below year-ago, but on target with WardsAuto&rsquo;s forecast of 17.3 million for the entire year.

However, incentives remain strong, and that’s the main reason sales have been tracking closer to an 18 million-unit SAAR than 17 million.

But, according to ALG, February’s 13.5% year-over-year increase in incentives was the smallest rise since August. Accordingly, except for January’s 17.4 million-unit SAAR, which was lower due to a major pull-ahead of volume into December, February’s SAAR also was the lowest since August.

An initial estimate for fleet penetration, based on publicly available data, indicates volume was relatively flat with year-ago. Thus, retail volume was below year-ago.

The most heated competition appeared to be in the Large Pickup segment. Sales increased 10.9% over year-ago – the biggest jump since July 2015 – and greatly benefited four of the five automakers in the segment.

Overall results for FCA and Ford would have been much worse than the declines of 10.4% and 4.1%, respectively, if not for fullsize pickups, while the segment drove General Motors and Nissan to gains, 4.1% and 3.7%, respectively, instead of losses. The outlier was the Toyota Tundra’s 12.9% shortfall, which exacerbated Toyota’s overall decline of 7.2%.

CUV deliveries increased 10.1% from year-ago, thanks to a whopping 16.7% gain in the Middle CUV segment, the biggest segment in the market. Interestingly, Small CUVs, a fast-growing and expanding segment, posted an 11.5% decline, its first since October 2012. The downturn followed a tepid 1% gain in January, at a time when inventory for the segment is getting bloated.

The Small Pickup, SUV and Large Van sectors also recorded increases in February, while the Small Van segment continued a precipitous slide that began in the latter part of 2016, declining 20.9%.

All car segment groups recorded declines, with Small Specialty and Middle Luxury the only segments to post gains.

Through the first two months of 2017, sales totaled 2.463 million units, 1.4% below year-ago. WardsAuto is forecasting 17.3 million for the entire year.