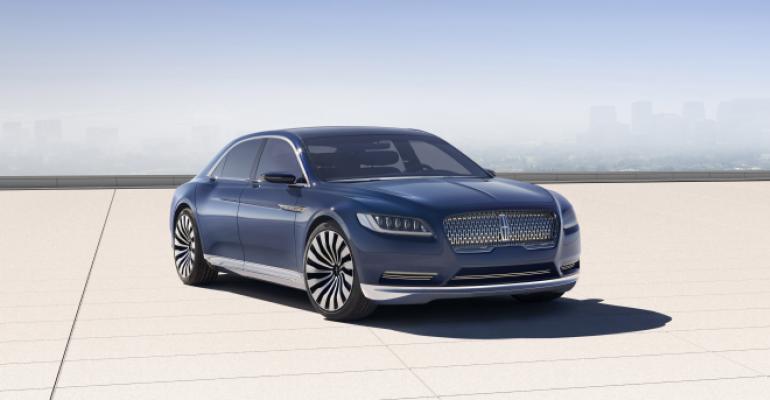 Not Your Dad’s Lincoln Continental, But That Name Means Much at Ford

In a Q&amp;A, Ford CEO Mark Fields discusses the power of the Continental brand and how the name inspired designers to create a concept car that debuts in New York.

NEW YORK – As Ford revives the Continental name for its Lincoln luxury division, CEO Mark Fields recalls a design-meeting turning point that led him and others to think they were on to something big.

In 2013, Fields and other executives met with designers to see how their work was progressing on the as-yet unnamed future Lincoln fullsize sedan.

The executives’ general reaction to the rendering they saw was that “it wasn’t good enough,” Fields says here at the unveiling of the Lincoln Continental concept car that is slated to come out next year.

“We looked at the design team and said, ‘What if we called this ‘the Continental?’” Fields says. “Their heads snapped back.”

The original Continental dates to 1940 and was created under the direction of Henry Ford’s son, Edsel. In its day, the Continental symbolized taste and style. Architect Frank Lloyd Wright described the 1940 version as “the most beautiful car in the world.”

But it lost its cachet and admirers over the years. It was just another big car when the plug was pulled on the model in 2002. But the power of the name never died, as evidenced by the design team’s reaction to the name proposal.

Duly inspired, the team went back to work. The concept car that came from their efforts debuts in conjunction with the New York International Auto Show.

The name may be a blast from the past, but the vehicle itself is thoroughly modern, and Lincoln intends to put it up against competitors in a global marketplace. That particularly includes China, where the luxury segment is fast-growing.

“We didn’t do this car as a drag into the past,” Golhatra says. “We needed to do it in a modern way, by blending craftsmanship and technologies.”

The automaker describes it as “the future of quiet luxury.” It ultimately will replace the MKS sedan and represents a departure from the Lincoln “MK” nomenclature of recent times.

The Continental concept makes its presence known with a sleek and substantial side view and a detailed front and rear.

Rear-seat passengers also get a tablet-supporting lap tray that deploys from the through-center console, and a champagne storage compartment. Detachable leather travel cases are mounted to the back of the front seats.

The Continental Concept is powered by a Lincoln-exclusive 3.0L EcoBoost V-6.

Driver-assist technologies include Pre-Collision Assist with Pedestrian Detection, Enhanced Park Assist and a 360-degree camera that displays on the MyLincoln Touch screen.

E-Latch door handles wing out slightly. The doors open with the touch of a button.

Fields, who became Ford CEO last year, says he is committed to restoring Lincoln to its glory days. It now ranks a distant No.8 in U.S. luxury-vehicle sales, with deliveries of 82,000 units last year.

“The luxury segment is important, because it is growing faster than the mainstream market and represents one-third of industry profits,” he says.

Lincoln’s goal is to triple global sales, with much of those in China. Lincoln has 11 dealerships there and expects to increase that to 25 by the end of the year.

“We want to build a strong brand, build it slowly and to the point that it has momentum on its own,” Fields says at the concept-vehicle debut.

Fields on Revival of an Icon

At the event, he sits down with WardsAuto to discuss the revival of the iconic name.

WardsAuto: You mentioned the strong reaction by the design team to the Continental name. What do you think was going on there?

Fields: We specifically at the outset did not give the team the name of the vehicle, because we wanted to see what they would come up with. When we gave them the Continental name and they reacted as they did, it showed its power and heritage.

We have these iconic nameplates, and we should use that to inspire the team. Not to create a retro version, but to create a version that is freshly interpreted for today’s times, yet has bloodlines that are held in high regard.

WardsAuto: Do you remember who mentioned Continental at that moment?

Fields: We had been talking about it. So I mentioned to the team, “What if we call this the Continental?” And you could almost see the physical reaction.

WardsAuto: You mentioned the heritage, but what do you think triggered the minds of the crew?

Fields: A lot of them knew the Continental was one of the most beautiful cars we ever had. And the first thing they did when they went back to their work stations was to bring up those heritage pictures and say, “What were the things that set this vehicle apart as far as the proportions and how the sheetmetal was bent?”

They used that as inspiration. Literally, the first thing they came back with was close to what you see here today.

WardsAuto: What do you think is the best Continental in history?

Fields: The 1949 Continental has beautiful lines. You notice the doors of the concept vehicle with the handles integrated into the belt line. It’s a very clean surface; uncluttered. That’s exactly what that vehicle was all about. It was understated, yet had an elegance and beauty that was powerful.

Just like that original Continental, when we come out of a litmus test like this, every time I see it, I see something else I like in the concept vehicle. That’s timeless when you see something over and over again, and yet something else catches your eye, like it’s the first time you’ve seen it.

WardsAuto: What’s an example of that on this concept vehicle?

Fields: The proportions, seeing, for instance, how the C-pillar comes into the rear of the vehicle. As it goes into the deck, it looks substantial but not heavy.

The (21-in.) wheels are another example. At various angles, they look different. They catch your eye.

WardsAuto: The Continental was the brainchild of Edsel Ford, right?

Fields: Yes, he was a design aesthetic, a connoisseur of the arts. The Continental epitomized his view on how important design is for automobiles. (In developing this car,) we had intense pride but abject fear because the bar was so high.