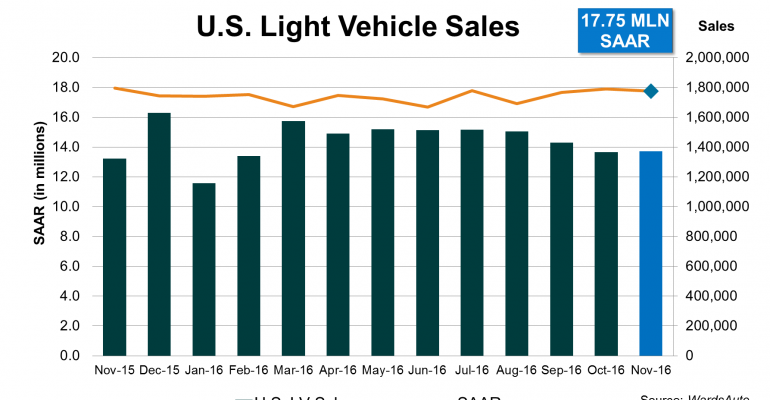 Falling average transaction prices indicate discounting has intensified over the past two months.

The results benefited from increased incentives and positive economic news, including a rise in consumer confidence. Also, the fallout from the presidential election held early in the month was negligible as stock markets rebounded to record levels after brief downturns following the results.

Even though the daily selling rate declined, actual volume totaled 1.372 million units, which was above year-ago by some 49,000 due to November having an additional two selling days – 25 vs. November 2015’s 23. The DSR fell year-over-year for the third time in the past four months by dropping 4.6% to 54,896.

The surge in raw volume leaves open the possibility 2016 could top the record set last year of 17.396 million units. However, December will have a shorter sales period compared with last year, and pull-ahead volume from November’s holiday-aided results will have an impact. Ever since automakers started doing more Thanksgiving holiday promotions a few years ago, November has become a stronger month for sales, while December — although still much bigger than November on a volume basis — has become weaker.

November’s volume was not just pumped by month-end holiday marketing. While year-over-year changes in average incentives have increased by double digits over most of the year, including in November, falling average transaction prices indicate discounting has intensified over the past two months. Revisions by TrueCar to its initial October estimate showed ATPs declined year-over-year for the first time since early 2013, and did so again in November.

Falling ATPs and rising incentives also partly explain the increase in retail share over the past five months, which helped offset declines in fleet volume during the stretch, including in November.

Truck sales were lifted by the biggest segment group, CUVs, recording a 1.6% gain. CUV share rose to an any-month record 34.1%, well above like-2015’s 32.0%. Additionally, deliveries in the Large SUV and Small Pickup segments were up 28.4% and 23.1%, respectively. Sales in the Large Pickup segment increased less than 1%.

Ford, GM, Nissan and Toyota all recorded gains in the Large SUV segment, with segment leader GM up 22%. GM recorded a 31% increase in the Small Pickup segment, while the leader, Toyota, was up 6.1% and the all-new Honda Ridgeline chipped in with sales of 3,464 units. The Nissan Frontier was down 7.9%.

Less a 24% decline by FCA US, which was hurt by a pullback in fleet deliveries, CUV sales were up 5.4%. Despite a lukewarm gain of 2.8%, lowest since July 2014, Small CUV market share hit 6.0% for the first time in November. Combined sales of the luxury CUV segments led the group by rising 9.3% over year-ago, pushed by Audi, GM, Jaguar Land Rover and Porsche.

Only two car segments, Lower Small and Small Specialty, recorded increases.  Most of the car segments with declines were down by double digits.

Market leader GM recorded a 1.4% gain and an increase in market share to 18.4% from November 2015’s 17.3%. Also recording gains were JLR, Kia, Porsche, Subaru, Tesla, Volvo and the Volkswagen Group. Sales of luxury CUVs gave Porsche and JLR big gains of 14.0% and 9.4%, respectively.