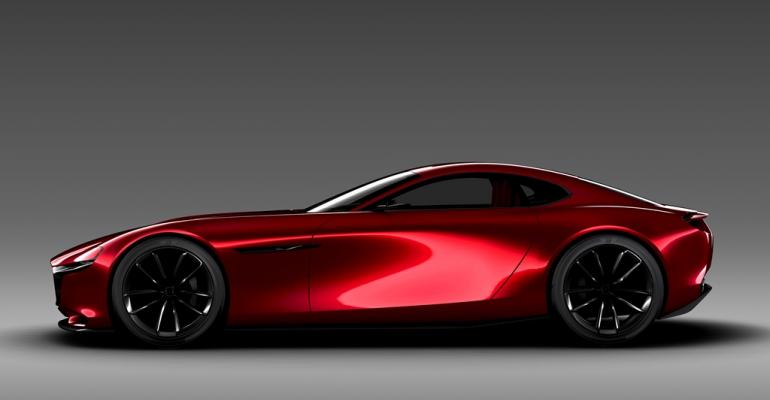 The automaker won&rsquo;t make&nbsp;a luxury model, but plans to reach out more to affluents.

LAS VEGAS – Mazda wants to move upmarket with its lineup, but will stop short of introducing a luxury model, a company executive says.

The Japanese automaker has no intentions of debuting “a premium, pricey model,” he says. Instead, Mazda wants to reach out more to affluent consumers.

“We’re not trying to go luxury; that’s not in our cards,” Wager says at the 2016 J.D. Power Automotive Marketing Roundtable. “But we are trying to make vehicles people will pay more for.”

Demographically, the average income of Mazda buyers is up, he says, adding the brand is attracting more college-educated consumers who typically can afford something beyond an inexpensive entry-level vehicle.

The automaker’s brand-loyalty ranking has improved, but it’s still below the industry average. “We need to work on it,” Wager says.

He touts overall improvements to the products themselves. “Our entire lineup has changed in three years, and our cars drive so much better now. It’s a question of getting (potential buyers) in them to experience them.”

Possible future products include a vehicle that would represent Mazda’s reintroduction of the rotary engine.

At a Q&A during his conference presentation, Wager says: “That concept car shows RX in the title. Every time we’ve used that in the past, it means rotary engine. I hope that’s the case this time.”

Afterward, he’s more precise about the rotary prospects for the car, if it indeed goes into production; that hasn’t been announced.

“That car wouldn’t come to market unless it has a rotary engine,” he tells WardsAuto. “That’s what they are working on.”

Based in Hiroshima and founded in 1920 as a harvester of cork for industrial applications, Mazda ranks No.16 among global automakers. It has 2% of worldwide sales.

Mazda is OK with being a little guy among much larger competitors, including Ford which once owned a 33% stake in Mazda. Ford CEO Mark Fields earned his stripes early on for turning Mazda around during one of its downturn when he headed it as a Harvard MBA graduate.

“We are comfortable with our place in the market,” Wager says. “We know how to make great cars and make money.”

But being small has its limitations, such as how much money is available for marketing and advertising. “We don’t have the budget like big players do to talk to everybody,” he says.