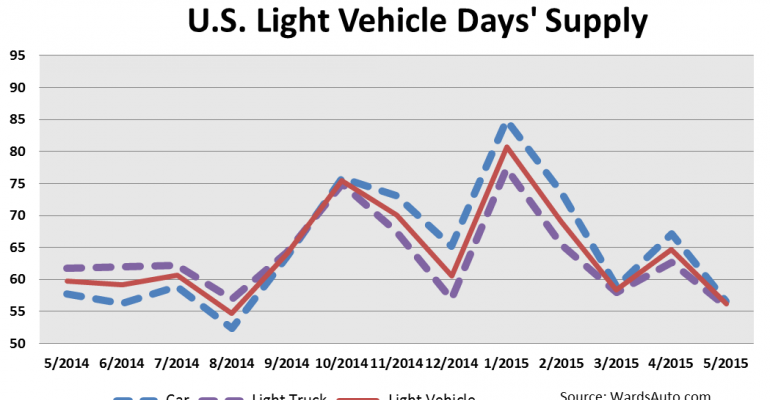 May U.S. Inventory Points to Another Sales Boom in June

The odds are June will be the second straight month with a 17 million-plus SAAR, which would be the first time that has occurred since 2004.

May U.S. light-vehicle inventory is setting up June to be the second straight month sales pass the 17 million-unit mark on an annualized basis.

Dealers ended May with 3.51 million units in inventory, 2.4% below the prior month. Inventory nearly always declines in May from April. It was a surprise that it did not fall further due to May’s record sales volume of 1.63 million units and indicates a higher than typical mix of last month’s North American production was tagged for the U.S. market.

WardsAuto estimates 83% of May’s light-vehicle output was built for the U.S., compared with an average of 76% over the past five years. Estimated imports for U.S. dealers declined slightly from year-ago in May, but are up 5% year-to-date.

In fact, inventory levels are narrowing the gap with last year and likely will be at or above year-ago at the end of June. That puts the odds better than even that June will be the second straight month with a 17 million-plus SAAR, which would be the first time that has occurred since 2004.

May inventory is 0.9% below same-month 2014’s 3.54 million. Days’ supply ended at 56, compared with 60 a year ago. However, that level is an optimum total for May in a year when sales are trending up.

As always, there are pockets where stocks are too low or high, but inventory largely is well-balanced across the board by automaker and segment group.

Subaru is the only company that is running significantly lean; for three straight months its sales volume was higher than its inventory at the beginning of each period.

In general, automakers have pulled car inventory, which is 2% below year-ago, in line with demand. But whereas sales of the Luxury Car segment group are running leaner vs. recent years, Small Cars, Middle Cars and Large Cars each could undergo additional inventory paring without negatively impacting demand. Year-to-date car sales are 1% below year-ago.

In the truck groups, inventory is up 1%, with year-to-date sales up 10%. Despite lagging the sales pace, truck inventory is ample enough to meet hefty demand in June while, at the same time, boding well for production in the remainder of the year.

Trending mostly to the lean side in trucks are CUVs and pickups, with a few SUVs also running a high sales-to-inventory ratio.