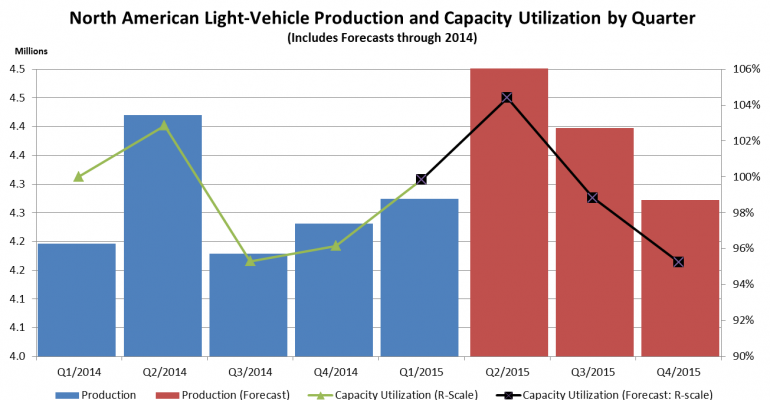 Additional North American production capacity in 2016 from a new plant at Volkswagen and increases at existing facilities among other automakers will raise available straight-time production to 18.4 million units.

Capacity utilization is measured by WardsAuto as a percentage of estimated straight-time capacity, based on what each assembly plant can build on a typical 2-shift daily schedule, five days per week, over 52 weeks.

The added capacity since Q1 2014 raised available straight-time production – the sum total of what each plant can build on its real straight-time schedule -- to an estimated 17.8 million units for 2015.

Additional capacity coming in 2016 will raise the total to 18.4 million units, thanks to a new plant at Volkswagen/Audi (San Jose Chiapa, Mexico) and estimated increases at existing facilities of other manufacturers.

Among the increases, Toyota’s Georgetown, KY, plant upgrades operations in time to add the Lexus ES to its production mix and absorb additional Toyota Camry production after supplemental output at Subaru’s Lafayette, IN, plant ends late in the year.

Also, increased available production at four General Motors plants will more than offset declines at some of its other locations.

Additionally, some plants with extended closures in 2015 for major tooling changes will be running the entire year in 2016, thereby lifting the total.