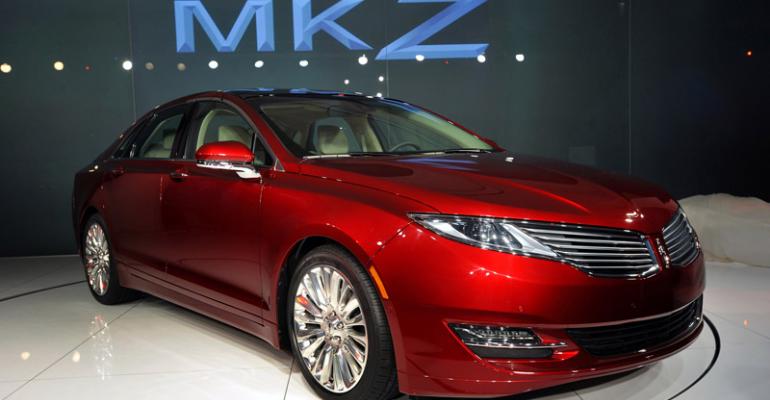 Demand was particularly strong for the MKZ hybrid, which saw an 11-day turnover compared with 22 days for the standard model. Ford plans to increase the mix to 30% for the &rsquo;14 model, which begins production this summer.

“In April, (the) MKZ was one of the fastest-turning vehicles on Lincoln or Ford dealerships,” he says in a conference call with journalists and analysts. “We’re very encouraged by the early MKZ performance, which is the first of four new Lincolns coming in four years.”

Demand was particularly strong for the MKZ hybrid, which saw an 11-day turnover in April compared with 22 days for the standard model. Czubay says to keep pace, Ford will increase the production mix to 30% for the ’14 model, which begins production this summer.

The MKZ was one of only two Lincoln models to post a gain for the month, according to WardsAuto data. Deliveries of the MKS fullsize sedan plunged 45.0% compared with year-ago, while the MKT and MKX cross/utility vehicles fell 33.5% and 11.2%, respectively.

Only the Lincoln Navigator fullsize SUV posted an increase, up 21.5% to 680 units.

The MKZ has some catching up to do in the Lower Luxury segment in which it resides. Over the past 12 months, starting last March, the sedan’s average monthly sales rate has been 2,061 units, a far cry from the segment-leading BMW 3-Series, with 7,954, and Mercedes-Benz C-Class, with 7,209.

Even within Ford’s own lineup, the MKZ underperformed, bested in April by the Mustang, with 7,751 deliveries, and Fiesta, with 6,080.

The Escape CUV turned in its strongest April since it launched 13 years ago, up 46.0% to 25,826 units. Czubay says Escape retail sales, alone, soared 52% from like-2012, helping make the CUV the top-seller in its segment for the first-quarter.

F-Series deliveries jumped 18.3% from year-ago to 55,474, the best April sales result for the fullsize pickup since 2006 and the 21st straight monthly sales increase.

Czubay says F-Series sales are being driven primarily by replacement demand and an uptick in the housing market. Over the past two months, the model accounted for nearly 120,000 units, leading to questions whether Ford’s installed capacity can keep up with demand.

“We recognized fullsize pickups were going to grow and added capacity last year,” he says. “We’re building all the F-Series we can now, and we continue to monitor the situation.”

The Fusion midsize sedan, which posted an 18.7% increase in April to 26,722 units, also is facing capacity constraints. Days’ supply was just 40 in the month, according to WardsAuto data. Auto makers typically consider 60 days’ ideal.

Ford’s Hermosillo, Mexico, assembly plant, where the Fusion is built, has “been working flat out for months,” Czubay says. “We’d like our inventory to be slightly more, but our dealers are very adaptable to working at the inventory levels they have.”

Ford February Sales Up 13.3%; Sequestration to Have Little Impact on Industry
Mar 01, 2013