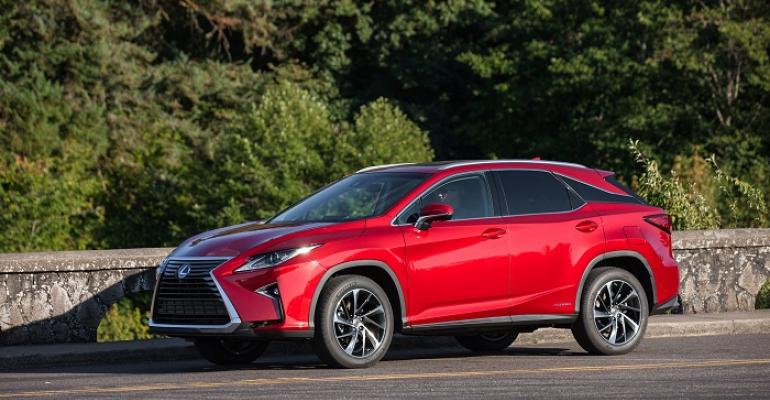 In 2015, the Toyota luxury brand delivered a record number of vehicles in the U.S., China and Europe.

Templin pegs Lexus global growth this year at roughly 3%, down from the brand’s 12% jump in 2015, as Asian markets “are really under fire right now.”

Contraction in new-vehicle sales in Thailand (Toyota forecasts 2016 sales there to fall 10%) and a softening in China gives Lexus “some negative impact, but in every other market of the world we see growth,” he says.

“It’s kind of hard to tell what the future is going to hold there and what the rules are going to be around emissions requirements and so on,” he says. “We have to play it kind of cautiously in the short term.”

Europe will continue to be a bright spot, Templin predicts.

Toyota Motor Europe reports Lexus hit a record 64,000 deliveries in Europe in 2015, up 20% from year-ago, and the brand saw market share gains in Western, Central and Eastern Europe.

Templin also sees growth in North America, despite prognostications of the U.S. plateauing.

“We believe North America will still have a couple more really good years,” he says. “It’ll flatten out, but it’ll be (at) a record (level). So if the next couple of years stay at that level everybody will be really good.”

While the NX CUV and RC coupe propelled Lexus last year, the redesigned RX CUV should carry Lexus this year.

Lexus will continue its pursuit of new markets, as Templin reiterates the brand is in three-quarters of those German luxury brands compete in.

“Right now we’re in 93 markets around the world (and) the Germans on average are in 140, so there’s a lot of markets where we have potential to go in,” he says.

Lexus is looking at entering four unspecified markets in the next two to three years, he says.

A Lexus official last year noted Mexico was an obvious choice, as the brand isn’t there officially, but many Mexican consumers venture across the U.S. border to purchase the luxury models.

Templin and his colleagues are adamant about launching into new markets “the right way.”

“We have one chance to make a good first impression so we’re not just going to give you cars and let you sell them, we’re going to build the proper facilities and pick the right partners in the marketplace,” he says.