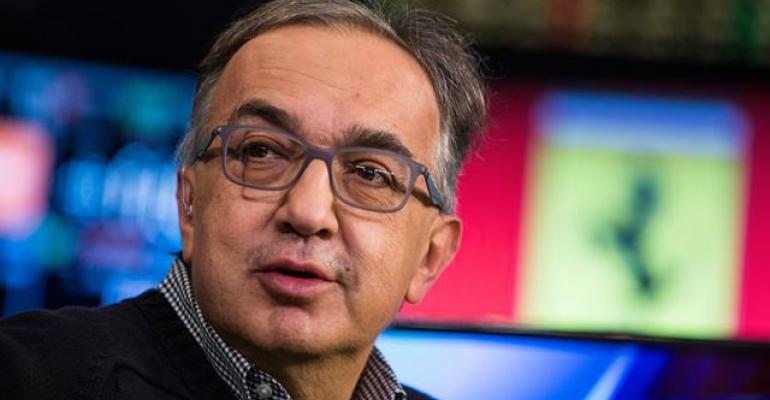 FCA says it is ahead of schedule to meet its 2018 projections and is revising its financial plans accordingly. Jeep and Ram trucks will become a much larger part of the portfolio going forward.

FCA gains in 2015, primarily led by strong Jeep sales worldwide, are driving decisions in 2016 and beyond to increase the off-road brand’s global availability and product portfolio as trucks and utility vehicles make up an increasingly larger share of the company’s lineup.

Marchionne doesn’t outline specific plans for increasing truck capacity, but does say once the Dodge Dart and Chrysler 200 “run their course” that capacity ultimately will be shifted to pickups and utilities. The small cars are scheduled for makeovers in the ’17 model year.

“There has been, in our view, a permanent shift toward UVs and trucks,” Marchionne says.

Jeep, led by the Toledo, OH-built Wrangler, will see increased capacity for a pickup variant due late this year and the Grand Wagoneer coming in 2018, as will Ram trucks, now built at the aging Warren, MI plant. Marchionne notes that the Warren plant is in need of a large investment to update it, lending credence to reports that truck production may shift to the nearby Sterling Heights, MI, plant where the 200 is currently built.

Jeep sales grew 21% to 1.3 million globally in 2015, led by North America with a 25% increase in deliveries on a volume of 865,000 vehicles. Jeep represents more than 50% of FCA sales in Asia-Pacific markets, while brand demand has tripled in Europe-Middle East-Africa since 2009, the company says.

Not all is rosy, however. Ambitious plans for the rollout of Alfa Romeo are dampened by a slowdown in the premium-car market in China. As a result, the revised Alfa plan now shifts focus to the North American and European markets, with China as a secondary consideration, Marchionne says.

Production of the delayed Giulia midsize sedan begins this quarter, part of a plan to launch an 8-vehicle Alfa portfolio by 2020. FCA’s 2014 plan had called for expanding Alfa’s sales to 400,000 worldwide by 2018, but the revised outlook contains no volume figure.

Regionally, FCA says its NAFTA margins are already at the level originally projected for 2018, Europe is profitable one year ahead of expectation, but Latin America is bogged down by a weak and uncertain economy in Brazil. China is becoming a tougher market due to a softening luxury segment and more local competition.

Marchionne assures that FCA is capable of meeting emissions requirements now and into the future, with or without purchasing credits that allow the company to continue to produce large trucks and SUVs without regulatory penalty.

But the CEO says he does foresee that “electrification is inevitable” to meet emission standards, starting with the plug-in hybrid electric Pacifica minivan revealed this month at the North American International Auto Show and continuing into trucks such as the mild-hybrid Ram due in 2018. He expects more than 50% of FCA’s fleet ultimately will be hybrids of some type.

Although diesel plays a role in the company’s strategy today, and the 3.0L EcoDiesel V-6 in the Ram 1500 just picked up its third consecutive honor as a 2016 Wards 10 Best Engine, Marchionne says the technology won’t meet future emission standards.

“Sometime in the next five years diesel will become offensive to the fleet,” he predicts.

As expressed in his remarks to media at the Detroit auto show, Marchionne remains concerned about how the industry transitions to new mobility and autonomous driving paradigms. He says FCA’s plan includes investment to meet those demands as they arise later in the decade.