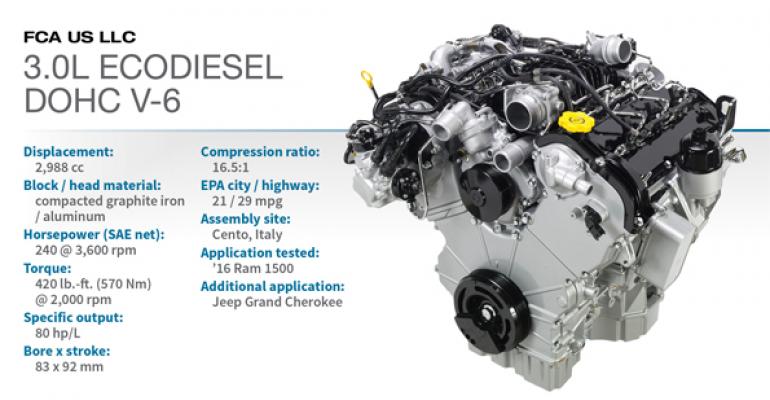 Two diesels, the Nissan/Cummins 5.0L V-8 and General Motors&rsquo; 2.8L Duramax 4-cyl., were in the running for Wards 10 Best Engines but could not keep up with the Ram 1500&rsquo;s 3.0L EcoDiesel V-6, which completes a three-peat of fairy-tale proportions.

A WardsAuto editor was strolling in the woods one day and came upon a house. Instead of going inside, he walked around to the garage, where he found three pickup trucks with new diesel engines.

He climbed inside the biggest, the Nissan Titan XD, with a 5.0L V-8 developed by diesel expert Cummins, turned the key and took it for a drive. This engine is too big and too loud for most customers who want a light-duty pickup truck, the editor said.

He then climbed into the smallest of the three, the Chevrolet Colorado, with a new version of General Motors’ 2.8L Duramax 4-cyl. diesel that first launched in Thailand four years ago. This engine is too small, too loud and too expensive, the editor said. (There’s a $3,200 premium over the cost of the gasoline V-6.)

In the third pickup, the Ram 1500, he found a 3.0L EcoDiesel V-6 that has been a Wards 10 Best Engines winner the past two years. Ideally sized and amazingly quiet, this engine is just right, the editor said.

In the simplest of terms, what was true for Goldilocks was true for us as we set out to evaluate these three diesel engines. With the new entries from GM and Nissan/Cummins breathing down its neck, we fully expected to say thanks for the memories and bid a fond farewell to the Ram 1500’s diesel V-6.

We gave the two challengers a fair shake, logging lots of miles in the city and on the highway, and we did what people do with diesels: We towed. We hitched trailers weighing 5,000 lbs. (2,268 kg) and 9,000 lbs. (4,082 kg) behind the Colorado and Titan XD, respectively, and we were impressed with their capabilities.

But the Ram trumps them both in the category of noise attenuation by such a wide margin that neither had a fighting chance. “Sounds like a Tesla compared with the Nissan/Cummins,” an editor writes on his Ram scoresheet.

Keep in mind, honoring the latest technology is a vital component of our competition, and we recognize the GM and Nissan/Cummins engines are loaded with worthwhile bits.

But the Ram engine is so smooth, whether at idle, cruising the highway or towing a boat uphill, that customers who don’t mind paying the $4,770 premium over the gasoline V-6 offered in the Ram might never want anything but a diesel for their future truck purchases.

No, the FCA engine cannot match the prodigious torque rating (555 lb.-ft [752 Nm]) of the Cummins diesel. But on paper the most capable gasoline engines available in other fullsize pickups appear closely matched with the Cummins for towing – at least closely enough to persuade many shoppers to save the money and stick with the gasoline offerings.

But the Ram 1500 EcoDiesel is well suited for towing lots of things, including a loaded camper. This 3.0L continues to impress us with ideal measures of power, torque, refinement and luxury-car smoothness. The fact that this engine is used in Maseratis in Europe says a lot about its flexibility. “Nobody is hitting the light-duty niche with as strong a powertrain,” an editor writes on his scoresheet.

Fiat Chrysler has had a tough time meeting brisk U.S. demand for the 3.0L diesel V-6, which is built in Cento, Italy, and shipped to truck plants in North America. Lovers of diesel hope this fairy tale never ends.